With that title I could be referring to a loud song by Nightwish the symphonic rock combo from Finland. But I could equally cut out the middle-Finns and go straight to the horse's mouth Charles Darwin: ". . . from so simple a beginning endless forms most beautiful and most wonderful have been, and are being, evolved." with which he wrapped up his Origin of Species.  My son the engineer, aka The Boy, pointed me at an amazing Big Science project which aspires to display the Tree of Life.
This is one link that you just have to follow up: nothing I can say captures the half of what you can find out on the site itself. Any ToL is a graphical display which attempts to capture the evolutionary inter-relationships among different species. Things which share a recent common ancestor are adjacent twigs, while more distant relations appear on different branches of the tree. What the OneZoom project achieves is a zoomable display that enables you to see an overview of the 'tetrapods': the lads who climbed out of the water and began to inhabit dry land about 375 million years ago in the Devonian period.  Remember Neil Shubin on The Blob last year with his fossil intermediates between fish and amphibians? 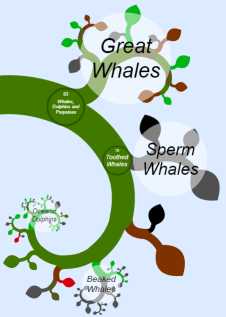 What the tree looks like is a series of splits where one type of animal separated into two or more sub-types and each went on to evolve numerous variations on that overall solution for living. OneZoom's tree makes an explicit claim for the fractal nature of these evolutionary splits and propagations. Whatever scale you consider, the taxa are divided into proliferating branches of related animals So the tree of whales [L] looks like the tree of mammals looks like the tree of life if you squint up and ignore the labels .

Within tetrapods, amphibians peel off from the stem with a distinctive morphology, then mammals, then lizards&snakes, turtles, crocodiles and finally birds.  In the old days we shoved a bunch of these groups into a bin called Reptiles although the only thing they had in common was that they weren't birds, mammals or amphibians.  Each of those groups forms its own Class [a technical term with a particular meaning in taxonomy]. I show [above Right] part of the representation of the Laurasiatheria, which is one of the four great groups of placental mammals. The other 'superorders' are Afrotheria, Xenartha and the rather chewable mouthful Euarchontoglires. It's been easy enough to recognise membership of a particular/peculiar group from their anatomy: bats have wings, whales have flippers, carnivora have big teeth, insectivores have sharp ones.  What was hard for Darwin and his contemporaries was sorting out how these mammalian Orders [another technical term] were grouped.

That only became possible when molecular sequence data came on stream in the 1980s and 1990s. Des Higgins and Dan Graur were early adopters of these molecular tools to show that whales & dolphins were really artiodactyls: with a lot more in common with cows and sheep than they had with, say, seals or manatees.  That was counter-intuitive, not to say controversial, until the whale-people stopped to reflect that hippopotamuses also were artiodactyls.  Just a few days ago I was talking about the taxonomy of rhinoceroses which are not artiodactyls but not a million miles away from that group either.  Seals are also part of Laurasiatheria along with cats, dogs, bears, and other carnivora.  That all sort of hangs together: even-toes ungulates [artiodactyls] mincing about on their toe-nails with odd-toed ungulates [perissodactyls] along with other large running mammals which eat other mammals as a specialisation. No 19thC anatomist would have thrown bats into the same group: they are so peculiar and so different.  But the molecular data is quite emphatic: bats are within Laurasiatheria.  They are also the second most populated mammalian Order after Rodents: 20% of all mammalian species have wings.

Who gives a damn? I mean there's got to be more to biology than the naming of parts and classifying species into bins and those bins into buckets and those buckets into dumpsters. The OneZoom project also embeds data about the species in question, notably their conservation status, but also the wikipedia entry, if any, and a number of other biological databases, so you can get a picture [literally usually] of each species' position in the wide world. What about us? Well I can tell you that we are part of the Euarchontoglires. But as my pal Karsten observed:

Did you see the leaf for humans?
"Conservation status: Least Concern"
Interesting way of putting it...
Indeed!
Posted by BobTheScientist at 07:09