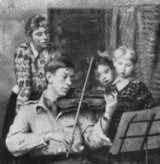 Just before I left for a long walk in Spain ten years ago, I was at a wedding in the church in Slad, near Stroud, Gloucester. In the churchyard is a gravestone with the Inscription Laurie Lee / 1914-1997 / He lies in the valley he loved.  In the visitors book, someone had written a tribute to Laurie Lee (R, on the fiddle), saying that the inscriber had just returned from Almuñécar.  I added my own comment that I was, in two days time, going to be in Vigo at the other end of young Laurie's journey.  These were both insider references to the best Bildungsroman of them all: As I Walked Out One Midsummer Morning. Maybe that's putting it a bit strong: To Kill a Mockingbird, and Narziss und Goldmund also have a claim in my booklist.  But for heart-achingly evocative travel writing AIWOOMM must be near the top of any list.

I was back in Stroud just ten days ago. And begob, in Dau.I's favorite hang-out, Black Books cafe-bookstore, they were handing out postcards pushing The Woolpack Cider Festival Sat 28th June 2014 to celebrate the centenary of Laurie Lee's birth on 26th June 1914.  I was annoyed with myself that this event had crept up on me without my poetdar giving me much notice. According to my Stroudy contacts, they are a bit worn out with the celebratory events in Slad and the other Five Valleys. There's even a Treasure Hunt and I love treasure hunts.

Laurie Lee was a poet who is famous for writing Cider With Rosie his nostalgic memories of growing up in a remote rural England Between The Wars. CWR became the set-book for British teenage examinations and sold a million copies. If you can read the culminating encounter with Rosie under a hay-wain "Then she took off her boots and stuffed them with flowers. She did the same with mine" without remembering the heart-pulse and wonder of your own adolescent fumblings, it must be too too long ago. It's getting a bit hazy for me. That occurs near the end of the book which is wrapped up smartly with the description of  a 1000 year old way of life, based on the horse, being parceled up and thrown away in the decade of Laurie Lee's teenage years. "At a local memorial after Laurie died, it was announced that the real Rosie was present and would now stand up, whereupon four old ladies rose from their seats."

Whether to avoid getting snagged by a local lovely and having to settle down or from a poets relentless restlessness, in 1934 at the age of nineteen, Laurie threw a spare shirt and a fiddle into a haversack, kissed his mother and walked out of the valley to seek his fortune.  He busked his way along the South coast of England before turning North to London. There he falls in with a bohemian crowd;  working in the building trade; living in a garret; scribble scribble scribble; until his wanderlust takes him off again.

Where?  Well he had a single phrase of Spanish "Un vaso de agua, por favor" learned from a girl back home who'd lived in Buenos Aires and that seems a good enough reason to buy a one-way boat ticket to Vigo in the NW corner of Spain.  He spent the next year walking and busking his way zig-zag across the country. At about the same time, his contemporary Patrick Leigh Fermor was walking across Europe in a different direction.  If Slad had rapidly moved into the mid-twentieth century, much of Spain was still stuck in about 1227.  The descriptions of the dusty roads and the broiling sun "The violence of the heat seemed to bruise the whole earth and turn its crust into one huge scar. One's blood dried up and all juices vanished; the sun struck upwards, sideways, and down, while the wheat went buckling across the fields like a solid sheet of copper" cries out for an ice cold beer. Laurie eventually finishes up in Almuñécar just as the whole country starts to throw off the medieval shackles of church, army and landlord. For a few brief weeks in 1936 everything and anything seems possible, somewhat like the Summer of Freedom in the USA in 1964.  But in Andalusia, where Franco's Nationalists rapidly achieve the ascendancy in the Civil War, the shutters come slamming down again to reinstate repression and the previous power structures.  Many of Laurie new friends will be killed in the process but, in a rush that precludes deciding to, the poet is rowed out to a British destroyer sent from Gibraltar to rescue His Majesty's subjects.

Parts of Republican Spain held out for another three years, giving Laurie time to return to Spain the hard way, smuggling himself over the Pyrenees through a blizzard to fight, almost as briefly as George Orwell, on the Left side of that titanic and tragic struggle.  AIWOOMM is a Bildungsroman because you can see the protagonist grow in stature as events unfold. Spain inspired him and woke him up, so it is entirely appropriate that the festival in Slad on Sunday should feature Cider and Flamenco.