Wow, we really need more WITS. Rachel Skinner is now the VP of ICE (the Institution of Civil Engineers) in the UK but she started off in Geography, which is often bizarrely plonked in the Faculty of Arts. She secured a 1st Class Hons degree from Durham, where Geog is shoe-horned into the Faculty of Social Science. At about the same time The Boy might also have studied Geography in UCD if he'd ticked the [exempt from Irish] box on his application form. But he didn't, so he came to engineering through the School of Hard-Knocks and the University of Life, and a winnowing 9 years at Open University. At the time of his UCD application I thought Geography was a great choice of subject because it could go any direction: water-sheds in the Andes; plastic gyres in the Pacific; plastic buckets in Nairobi; arsenic in Bangladesh . . . and that's just the watery bits.  His Headmaster, a rather unimaginative fellow, said "Oh, I think he can do better than that" meaning that The boy's grades at Leaving Certificate might qualify him for a course with "higher points", maybe not Medicine, but 'better' than Geography. This annoyed me for the reasons I've tried to articulate above. 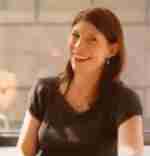 What do you do with a Social Science 1st from Durham? You take a job to make a bit of money before you go travelling. That's what Rachel Skinner [L ooking happy] did aNNyway, being given a desk in a transport planning office. That could be seen as a soft option but Skinner is a bit of a quant and naturally started to crunch numbers rather than form committees to investigate the tangle of paths in the yellow wood of transport futures.  She claims that she "fell into engineering completely by chance" but that's a) a bit self-deprecating and b) probably nonsense because we make our own luck.  Like The Boy, her company must have allowed her day release to secure a MSc in Transport Planning & Engineering (with distinction, Leeds U) in 2001 (aged 25). From there it's natural to qual up as a Chartered Engineer (2002, aged 26). CEng is not a shoo-in, they "are characterised by their ability to develop appropriate solutions to engineering problems, using new or existing technologies, through innovation, creativity and change." and are grilled into the club by a board who have no intention of debasing the currency.

Like geographers, engineers are a broad church. Nothing human, mechanical, civil or electrical is beyond their reach. Collectively! I'm not claiming that expertise is present in any single pair of hands, but with a degree in Engineering you can go aNNywhere . . . and be useful. The post-title is a quote one of Skinner's pieces-to-camera; she points out that engineers and their works often fade into invisibility against the unconsidered background of daily life. We take the bus to work, squinting at our smart-phones, along roads and across bridges without stopping to think that these were all created by engineers. The lift to the office works, the stairs don't collapse if we run up them, our hip-replacement doesn't creak, the pencil-sharpener is fit for purpose . . . because of engineers.

Transport Planning - traffic flows, margins of error, safety - are complex with elements of chaos (sensitivity to initial conditions). You can't do that with a sharp pencil and an envelope; you need to write some code or plug numbers into someone else's program and see what comes out of the box. BUT you have to apply your quant crap-detector to those figures: "there’s a need for common sense checking and understanding about the sort of answer you’re looking for, from first principles". IF the numbers are an order of magnitude different from what the pencil-&-envelope and/or your life-time's experience tell you THEN you need to double check the inputs. My students will happily report that a bale of 44 concrete blocks is half a billion cu.m., because they close their eyes and think of Ireland when required to do sums.

And what about girls? You don't need to be built like a rugger prop forward and wear 20kg rigger boots to contribute to an engineering project. Steel-caps and hard-hats come in all sizes now and computers will do a lot of the bump-and-grind number crunching. Engineering doesn't have to involve differential calculus, and you can get by will basic maths, so long as you have a feel for materials and systems.  Even without those intuitions, a lot of your real training isn't book l'arning at school and college - it's being mentored at the drawing board and out on site until you grow your own ways of doing.  If you're an engineer then you know other engineers: some bad, some stellar; some lazy, some strivers; so you know what the sector requires. If you care about the future of engineering you need to find your successors and they are now in school wearing plaid skirts and a late 19thC blazer. All it takes is for someone, preferably unrelated, to say "You've just said/done something interesting; that's how engineers think; it can be a lot of fun, the money is okay; the work will be testing but you'd ace it. . . What? you want to read Geography at Durham? You can do better than that". Film time:

More women in science
Posted by BobTheScientist at 07:12