Years ago in the Autumn of 1989, I walked up the Atlantic coast of Portugal, alone but not lonely. After each day's walk, I'd descend on some off-season village and try to find a bed for the night. I got to stay in a wide variety of places: hostels, small hotels, odd rooms, very odd rooms. In one place, the window looked into a dark inner courtyard that was filled with an enormous fig-tree. The window didn't close properly and I started awake in the dark wee hours to hear a herd of mosquitos questing for blood. I put on the feeble light and hunted down a few but they were noisy and innumerable so I was almost in despair of getting through the night without ending up a dried out husk. But with commendable ingenuity, I took down the net curtains and with my emergency hank of paracord, paper-clips and safety-pins (essential for drying clothes on The Way) and rigged up a functional mosquito net: the noise is much less annoying if you know t'buggers can't get you!

This all came back to me because, at Christmas, The Boy brought me a tiny device that was brimful of podcasts, a lot of them from the BBC. There is probably 500 hours of listening material there and that doesn't take account of the stuff that is in the same part of the BBC archives that didn't finish up on the device. One of the seams which The Boy mined was a series called TLS The Life Scientific in which an amazing diversity of scientists are interviewed with care and attention to details by nuclear physicist Jim Al-Kalili. There are more than 150 of them waiting to be heard, indeed I've already noted the interview with Niamh nic Daéid. I like this medium very much: Al-Kalili does his research, or the programme's researchers do, so the questions are not vapid and because he is a scientist himself, there is always some common ground of understanding. You might check out A Passion for Science an earlier riff on the same idea where Lewis Wolpert [bloboprev] interviewed the scientists.

More or less at random, I thought I would hear what Janet Hemingway had to say, on the basis that I'd never heard [of] her, which is much more a comment on my memory or my insularity than on her reputation or her importance. It turns out that she is the youngest woman to have made Professor grade in UK science and was elected FRS in 2011. Which is not bad for a girl whose folks ran a corner shop in Yorkshire. She went through the same "girls don't do science" nonsense at school as Jocelyn Bell, but secured a 1st class degree in Genetics from U Sheffield aNNyway. That was at least partly because she designed her own final year research project - on mosquitoes - because she had decided that mosquitoes were important and interesting and blagged a couple of the faculty into 'supervising' her. That contribution and some active networking in the mosquito world secured her a PhD place at the London School of Tropical Medicine and her career was launched. She is a vectorologist looking, not to cure malaria, but to stop mosquitoes transmitting the malarial parasites. If you can achieve that then you've cured the disease; which has to pass alternate generations in an insect host. I've been down this vectorcentric track before. 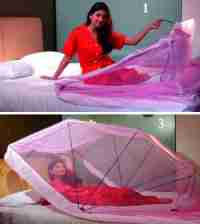 Hemingway has been pushing out the mosquito nets for the last 30 years because that is one of the most effective, certainly the most cost-effective means to reduce the spread of malaria. Available [L] in a fetching pink. But for full effect you have to impregnate the nets with insecticide because, tossing and turning in the tropical night, it is impossible to ensure that your arm does touch the net and thereby allow the mosquito its blood meal which load is equivalent to the fly's body-mass. But the mosquito is already dying from contact with the poisoned fabric. Another canny avenue is to spray the walls inside the homes. With a full load of blood, the poor mozzies cannot fly far and tend to pause on nearby surfaces to catch their breath. If the walls are impregnated with pyrethrum, or carbamates or organophosphates then the mosquito feet will absorb a fatal dose. Actually, because insecticidal resistance is A Thing pretty much worldwide now, it's a good idea to try pyrethrum and carbamates.

That has also been one of Hemingway's significant contributions: the recognition that the reproductive rate of mosquitoes are so great that they effectively behave like bacteria in evolving resistance to poisons quickly if the selection pressure is sufficient. Not only that, but she was early to show that the mosquitoes can develop mutations more or less simultaneously in several different genes / pathways so by the time chemists have developed a new therapy, some mosquito somewhere has already developed a biochemical work-around. But that's not her real contribution, which has been more to have a magisterial holistic overview of The Problem and to bring the players round the table to talk with each other: chemists, ecologists, vectorologists, policy-wonks, biochemists, doctors, geneticists, nurses, entomologists, health-visitors. Those are two very different skill-sets: seeing the big picture but also enticing people out of their bunkers to come along for the ride.

Her excellent network skills have seen her grow the Liverpool School of Tropical Medicine LSTM, where she has been Director since 2001, to a major player in World Health: 3x the personnel and at least £50 million capital investment for buildings to house those Effectives.. And she has obtained huge grants from the Gates Foundation to support her brain-child, the Innovative Vector Control Consortium (IVCC). In her words, Gates money has allowed pharma companies to 'de-risk' research in novel therapies. She is in the process of retiring as Director of LSTM, so that she can devote more time to research. The woman is a whirlwind.

More women in science.
Posted by BobTheScientist at 07:17