Every year in January the Royal Dublin Society RDS hosts a Young Scientists competition. For the last several years this has been sponsored by British Telecom as BTYS. Royal? British? really the optics don't look good 100 years after Ireland fought a bloody war of independence. Still-and-all, it's better to have BTYS in the RDS than to have nothing to show-case the ingenuity, tenacity and technical ability of our teenagers. As I say repeatedly to my students at The Institute "You are the Future of Ireland as a Technological Nation" FITNa. It takes a chunk of committed time to even get a project to the Finals. Time on experiments and analysis when their peers were having time on iPhone and ice-cream. I have a bit of an interest or at least an angle on both the winning project and the first runner-up. 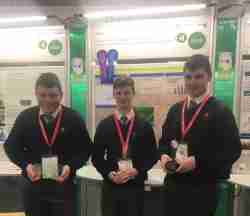 The latter first: Feeding 9.6 billion people by 2050. The effects of Pseudomonas fluorescens L321 on enhancing barley crop yield. A project steered through choppy seas to port by Darragh Twomey, Neil O’Leary, Andrew Heffernan from Colaiste Treasa, Kasnturk, Co Cork. Pse.fl. L321? I know its very bones, or at least its DNA sequence. When I started work at The Institute five years ago, three of my colleagues had just finished a trial of PGP (plant growth promoting) bacteria. They had started by isolating bacteria from the root nodules of plants which grew better than their neighbours in a controlled field trial. Three strains of those bacteria were taken forward for lab studies to discover Why? they enhanced the growth of their host plants. Part of the discovery process was to get the genomes of the bacteria sequenced. To this end my colleagues had obtained money to a) grow up the bacteria in a vat, extract the DNA and send it off to be sequenced commercially b) purchase a Linux server to analyse the data and c) employ a recent PhD graduate, now post-doctoral research fellow, to do the analysis. My appearance in January 2013 was providential because I was the only person on campus who'd ever analysed a genome (or two, or three). I was far to busy doing remedial maths and physics to do any genome analysis . . . and it wasn't my contract aNNyway. There was considerable irony in thus assigning people to tasks which were outside their competence [wot, me physics?] in a game of musical chairs in which every chair was a bad fit for the assigned bottom.

Nevertheless I made three key interventions:
That got me invited to some of the progress meetings at which the project was inched forward and eventually got my name somewhere in the middle of the author list of a paper.

The day after I heard about L321 winning a prize I bounced next door to ask my neighbour at work if he knew his (our!) PGP bacteria were helping to feed the starving millions . . . and who did these yahoos from Cork think they were? Well (of course) it turned out that he knew all about it; indeed he'd supplied the initial vial of L321. The lads from Kanturk had their idea about PGP bacteria and couldn't get sufficiently detailed mentoring from the science teacher. So they rocked up to the local branch of Teagasc, the agricultural advisory service . . . who said that PGP was above their pay grade but Teagasc at Oak Park in Carlow knew allll about it. Oak Park is just across town from The Institute and so the snaking network was able to complete the circle of complementary skills. I was vicariously delighted but also miffed: "When were we all going to hear about your contribution to scientific progress? When will you draft the press release?" I asked my colleague. I am continually brought up short at how little we communicate with each other at The Institute; it's like we're too busy teaching science to talk science. That can't be good for the quality, diversity or integration of the teaching.

Anyway. Hats off to the Boys of Kanturk - they put in the hours.
Posted by BobTheScientist at 07:26