When The Blob was last in Orkney, we were looking at a mammal with a peculiar diet - the seaweed-eating sheep.  We're back in the region again for similar investigatory purposes. When I was young the was one brand of crisps = potato chips = картофельные чипсы = patatine: Smiths. And one flavour: potato. Although each bag contained a little screw of blue paper containing a daily RDI of salt. Contrary to what is believed in Ireland, Joe "Spud" Murphy of Tayto Inc. did not invent the potato crisp in 1954. Smith's were selling well in UK and Australia 30 years prior. Although a case could be made that Tayto launched food-engineered crisps with added flavours - starting with Cheese-and-Onion and Salt-and-Vinegar.  Back then crisps were still a snack for the plain people of Ireland rather than the mad-flavour fashion accessory we know today. Sour Cream and Jalapeño has become normalised by familiarity but, in Ireland, we may not be ready for mint, beetroot or cucumber chips yet.  Make vids: Tyrrell's No Salt - Tayto in 1970s

Hedgehog Crisps were launched in the UK in 1981 as an ironic comment on crisps as fashion accessory. When it transpired that No hedgehogs were killed in the manufacture of these crisps, the Office of Fair Trading issued a cease-and-desist notice and Hedgehog were up in court for duping the public. The Man has no sense of humour. After consultations between genuine Romany hedgehog-eaters and Hedgehog's food chemists, the bye-line was changed from hedgehog flavour to hedgehog flavoured and honour was satisfied. The species at issue is Erinaceus europaeus, of the Order Eulipotyphla - which used to be Order Insectivora - hedgehogs, shrews and moles aNNyway. According to George Borrow (Lavengro 1851 and Romany Rye 1857), the gypsies would pack clay into the spines of the rolled hedgehog and bake them in and open fire. When done, the ball is cracked open and the spines remain in the discarded crust.

So what else will people eat in the small mammal department?
But if you lived 5000 years ago in Orkney, it is likely that you'd have relished a nice crispy vole roll. Microtus arvalis the common vole is found all over Eurasia. In Belgium it is either campagnol des champs or veldmuis depending on which side of their Mason-Dixon line [prev] you live. You could make a meal of a dormouse because they weigh in at 130g - more if you Hansel & Gretel them for the pot. But Microtus arvalis is less than 1/3rd of that weight, so you might think that it wasn't worth the trouble. 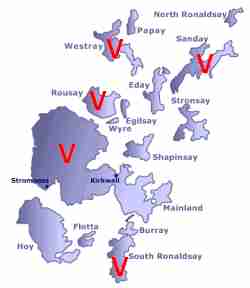 One of the peculiarities of mammalian biogeography is that while the common vole all over the continent, it is not present in Great Britain . . . or Ireland . . . or any of the smaller components of the Western European Archipelago except some of the Orkneys; see map [L where V identifies the Islands of the Vole: Westray, Sanday, Rousay, Mainland, and South Ronaldsay. For many years it was considered a separate species - it is about twice the weight of its continental cousin and has paler fur; but modern taxonomists put it firmly as a sub-species of the Eurovole Microtus arvalis orcadensis. A couple of years ago they did some DNA testing which pointed to an origin in-or-around Belgium and the supposition was that Vikings had somehow brought the field voles home to Orkney in a bale of hay fodder looted from Brugge or Antwerpen or indeed <parity of esteem alert> Bruges or Anvers. But a dig at Skara Brae, the extraordinary Neolithic settlement on the West coast of Mainland, revealed hundreds of charred spit-roasted vole skeletons in several heaps which were carbon dated to 5000 years ago. That's long and long before any Viking was a twinkle in his father's drinking horn. It looks likely that the trading network of the Skara Brae civilisation ran as far as continental Europe and included an order for some of those delicious furry morsels that the Belgae do so well. We think of those neolithic lads as bashing two rocks together to amuse themselves but are brought up short when we see the ruins of their buildings and monuments and, for me especially, the evidence of stuff travelling enormous distances to amuse and delight people at the ends of the Earth [prev stone axe from Umbria to Canterbury].
Posted by BobTheScientist at 07:47