Hey Lunatics, today is a very special moon. It's BIG, it's bloody and it's blue. I was skyping with Dau.II a tuthree days ago and she reminded me that tonight's full moon was three-ways important. It's big because it's close-up . . . at perigee syzygy, which I riffed on last time there was a Supermoon on The Blob. It's bloody because there will be a total eclipse of the moon . . . on the other side of the World: 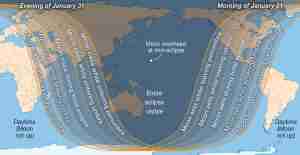 The line up only works perfectly over Australia, Alaska and East Asia and a vast expanse of Ocean dotted with small islands. It's Blue because, tonight is the second full moon in the month. That isn't super rare: the maths of the eccentric orbits of Earth and Moon ensure that 7/19 years have an extra 13th full moon which must slot into one of the 12 months to make a double-up. The Venn diagram of the three rare events occurs only about once every 150 years. So it really is a once-in-a-lifetime event.

Within a day of hearing this celestial triple from Dau.II, we had Dau.I visiting and she shared that there are three sorts of twilight. We three must love each other very much. My lightning-quick response to the Twilight Triple was "I thought there were four books in the trilogy". That drew deserved cries of "lame" and a slow hand clap. That's the thanks you get for trying to be down with the popular culture of post-teenage girls. So back to the evening and the morning. As you know, I recently benefited from the existence of fading light to locate sheep troughs in a dark field at least 3 km from the nearest street light. aNNyway, the facts: 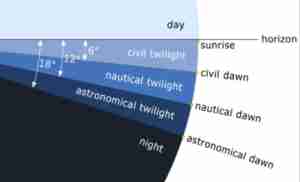 You can see from the diagram, that the grey between full light and full dark is, somewhat arbitrarily, divided into three based on what you can do/see as a function of how far below the horizon is the sun.
There you go. Didn't know that before, so I'm glad m'daughters and I are still speaking. Then, just this morning, Twilight popped up above the horizon pointing at an apology from the film critic Lindsay "Nostalgia Chick" Ellis. When Stephanie Meyer published her teen-girl fantasy about love in a time a vampyres, she struck a chord that sold 100 million copies of her books. Those are Harry Potter stats! Inevitably there was back-lash where the Commentary Commissars complained about the quality of the writing, the absence of plot, and how teenagers and/or their Mums who bought into the genre were sort of anaemic. Meyer and her followers got a much harder crit-storm because it is easy [and therefore lazy] to slag teenage girls - it's part of the process of eroding their sense of self-esteem . . . so they get a better bride-price. Lindsay Ellis is really good copy for deconstructing popular culture: funny, ironic and insightful. Here she is on David Bowie's Labyrinthine package.
Posted by BobTheScientist at 08:22