Tuesday, they were giving snow-flurries, some accumulation on higher ground, which is sort of useless: is our front gate at 235m above sea-level 'higher ground' or does that really only apply to the Red Hill behind our house at 520m?  I guess the benefit of living "as far from a bus-stop as possible in the province of Leinster" is that the weather usually improves as I drop down towards the lowlands of the Barrow River valley and work. If I can get out of the gate, I can get to work. Although I did experience Frost Flood at the bottom of our lane 5 years ago this week. 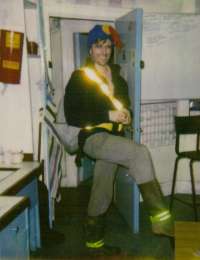 In the last cold snap over New Year, I was able to time my journey between home and Waterford, so that the watery winter sun had melted as much as it could and the temperature hadn't started to drop again with nightfall.  With the really short days and 3 or 4 0900am starts on my timetable, it is usually impossible to avoid a start-in-the-dark; which makes me anxious because you can't see the ice. In the days when I commuted to work by bicycle, I wasn't teaching regular classes and could delay my departure by 30 minutes if it was raining stair-rods when I shucked on my coat and PPE [see L vintage 1992 - the reflective ankle strips saved my life for 40,000km because they danced up and down as I pedalled and never needed new batteries].

Obviously I expect to be left to my own resources on the crappy  'county road' that forms the first part of my journey from the Outback, but the 'Main Road' is usually gritted by the county council - sometimes even at night!

<chemistry alert>But the grit in gritters is not grit as you find on sand-paper or in the world of geology. It is rock-salt, often brown in colour, but effectively 99% sodium chloride NaCl and chemically the same as table-salt. Stuff dissolved in liquids lowers the freezing point of water in accordance with Raoult's Law. The depression of freezing point follows a straight line proportional to the concentration of dissolves salt . . . to a certain point. NaCl and ice is able to get down to a temperature of -17.8oC. This is not coincidentally equal to 0oF because that was the coldest temperature that Dr Fahrenheit was able to achieve in his laboratory.

Scotland is a country which is about the same size and population as (the island of) Ireland. Their Winter weather is a little more extreme than we experience in Hibernia - further from the Gulf Stream; nearer to the Arctic Circle; higher mountains in the interior. They have been having a few dumps of the white stuff already this winter and keep the roads clear with a mixture of snow-ploughs and gritters. Timing is key! They want to get the gritters out as the snow starts to stick - too early and the salt gets blown away; too late and the dusting is overwhelmed; ice is much more difficult to deal with because the relative surface area is lowest. If you need to travel the 40km from Inverness to Invergordon, it would be handy to know if/when the A9 was gritted. Welcome to the 21stC! There are dozens of gritters in Scotland and they all have GPS transponders. These data are captured and integrated and displayed in real time by ArcGIS. As the gritter inches along the virtual highway, it leaves little green data-poos to indicate when grit was last deposited, and by whom [see map-clip at  head of post]. With this information, you can sit tight having a mug of cocoa until the road has been treated . . . and then zinnnng along to your destination. If you look closely you can see that most of the trucks have been given cutie-pie names. There has been plenty of delight in the names at Metafilter: Sir Salter Scott, Gritty Gritty Bang Bang, Luke Snowalker, Gritallica. Nobody has sprung for Gritty MacGritFace . . . yet.