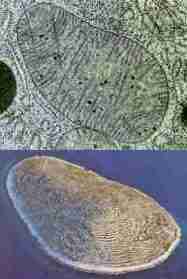 Scale is all. The picture above is an electron micrograph of a single mitochondrion - the power house of the cell [source]. It is 1 micron (1 millionth of a metre) long. Below is Otočić Bavljenac [bigger better picture], an island off the Dalmatian coast of Croatia, not a million miles from Split. Bavljenac is 500m long. It is known as Fingerprint Island because of the multiple parallel ridges whose function is rather mysterious  . . . unless you live on the side of a rocky hill which has been cleared for the purpose of agriculture. Our 7 ha. farmlet is divided into 8, 9 or 10 [definition of 'separate' issues] separate territories by stone walls. These walls serve two purposes a) to keep stock in particular domains and away from the oats, potatoes, hay b) to clear the fields of stones so that the oats, potatoes and hay may be grown at all at all. The first agricultural settlers hereabouts 200 years ago, marked out their patrimony in chunks of 0.5 to 1.5 hectares and started to pile stones up in straight lines to divide the nascent fields. On other parts of our townland, with steeper slopes and more run-off, the stones are too numerous for field walls and part of the property has been sacrificed as a huge rock heap with faced vertical walls filled with rubble. Vertical walls as high as could be made reliably stable, so as to maximise the rock bearing capacity of the area. It must have been the same on Bavljenac. But the stones were so numerous that the walls were really close together. You cannot harvest wheat easily from a series of table-cloth sized patches but you can scramble from one parcel to the next to harvest grapes. It seems likely that was the long-time fate of the fields of Bavljenac. Some rather dorky 'scientists' think so aNNyway. So the stripes and striations appear to be primarily to maximise the spaces.

In contrast the stripes and striations of mitochondria, which go by the name cristae, are primarily to increase the surface area of the inner membrane of each of these sub-cellular organelles. Why? Because the enzymes that perform oxidative phosphorylation and ATP synthesis are embedded in that membrane. More cristae means more bangs for bucks. Cells which have a high demand for ATP [the energy currency for all other metabolic activity] have proportionately more cristae in their mitochondria. They have more mitochondria as well. Indeed one handy 'definition' of stamina is the number of mitochondria in the cell. Training - concerted use - is one way of building up your store of mitochondria or increasing stamina.

You can go all woowah about the walls of Bavljenac and imagine that they are for catching messages from the gods or resonances from ley lines. There has been a lot of lazy-arsed rechurning of facts about the island since the meme came over the horizon in the spring of 2017. Any site that claims an area of 1.4 sq.km for an oval island 500m in length can be ignored, because a square island 500m in length can only be 0.25 sq.km and an oval island must be less. What's happened is that The Innumerati think 0.14 and 1.4 are essentially the same. This page has the 1.4/0.14 wrong but the best pictures. Likewise reporting the length of the dry-stone walls as 23 km and 357m is plainly nonsense because nobody can be confident about the final 7m. Why not 356m or 358m? They can't even measure swimming pools to that level of accuracy and they are engineered in concrete with vertical end walls. harrumph!

And fingerprints? What are they about? The idea that they increased friction to help us grip things better was debunked about ten years ago. An alternative, as yet untestable, theory is that act like tyre treads to shed water between the two surfaces, again to promote grippiness. Some people are born without dermal ridges because of a defect in their SMARCAD1 genes. The loss doesn't cause them any problems until they cross borders which require finger-prints!
Posted by BobTheScientist at 07:40