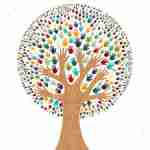 Right next to my office is a Student's Union notice-board. I think the SU will have blagging rights on such a notice board in every building on the campus: Hey Management, we're the SU you have to put up a noticeboard in Y Building so we can advertise 2-for-1 drinks offers in the clubs downtown. It's handy, apart from the cheap booze, because I get insight into what matters to the Yoof. Last week a clatter of posters went up making the case for gender-neutral 'bathrooms'. Different posters numbered #1 to #5, each giving another (positive) argument for the change. A tuthree days later, I paused infinitessimally at a table in the central concourse and was loudly invited to contribute to a diversity tree [see similar L]. This required me to dip my thumb in one of 5 pots of poster paint and apply the print to a very stylised tree outline. As an early adopter, I could choose my colour and place my leaf wherever I wanted. As I cleaned up my digit, I chatted one of the students, who had been in my math class two years ago.
Alice: Thanks for that, here's a scrap of kitchen towel.
Bob: I hear you're the SU now.
Alice: Nah, I'm just the VP.
Bob: I saw your gender-neutral loo campaign
Alice: Yes, that was me. We're aiming to have one such facility in every building.
I have a totally crap gaydar. But I paused for half a second to reflect that Alice is probably somewhere on the LGBTQRSTUV spectrum. I've no idea what I'm to do with that information . . . except forget it. At my age mumble mumble drool drool that will be easy.

The next weekend, Dau.I, who is down with the BLT, came home and I mentioned my gender-neutral bathroom escapades. We agreed that Trans [LGBTQ] people could do with their own bathroom in the same way as wheelchair people needed to be cut some slack. Apparently, some people's transdar is so well tuned that they officiously expel folk who seem to be in the wrong bathroom. And there is a lot of Bathroom Law about in the air in the US, which I guess that will authorize winkie-wigilanties to go round checkin' people's parts. Unless we have the super-continence of a 12 y.o. boy, we need somewhere to take leak during the working day. I often nip into the (almost completely unused] wheelchair bathroom if I'm teaching in the Library and need some tissue to wipe the whiteboard clean. I don't 'use' the bathroom any more than I would occupy a disabled parking space. It seems likely that the roll-out of trans-friendly bathrooms will happen, because The Man(agement) won't be abled to withstand the push despite the cost.

We have been promised a new Science Building - I vote to name it Tyndall - and stake-holders are being asked to think about how it should be equipped. The Man would prefer to cram 8 or more lecturers into open plan offices because the build costs are significantly cheaper than offices like mine which I share with two others. I'll be gone before the new building is finished but I'll insist on white-noise headphone sockets for everyone who works in an N > 4 office. Allocation of space at The Institute is feudal: the President has shifted her suite to the top floor of the latest building with a view of the river; the VPs have offices with atriums, heads of school have big offices, heads of department slightly smaller offices . . . while The Effectives can't lean back in their chairs without exchanging cooties with a co-worker. I think the workers would have grounds for dissatisfaction if they get stacked like cord-wood while genders are nuanced into multiple options. I think we've moved on from SWM blokes freaking out about sharing the jacks with The Gays, but a couple of assaults and there will be G and L bathrooms for parity of esteem with M & F and T. But if we're going down that route there are two barely commensurate Trans options. Boys who become women have a much rougher time of it that girls who join the blokes. No surprises there: the latter find that people now listen to them, laugh at their jokes and talk about The Match.

Dau.I can't give me numbers or %s of Trans people but I'll wager €50 that they are outnumbered by Muslims by at least 10:1 in modern Ireland. The Koran requires believers to wash their parts after use.  I know this because I went to a funeral several years ago via Birmingham Airport and saw all the signage for appropriately serviced bathrooms near the multi-faith room. Only certain categories of water will do for 'wudu', and regular toilets - both M & F - are inconveniently far from clean water.  Here's one woman's solution to having To Go at work involving wads of wet tissue. Her parents had another solution at home: "My parents went hi-tech in our family home and installed a "Muslim shower" – a mini shower head and hose that attaches to the wall on the right side of the toilet. It was soon removed, though, because the water pressure was far, far too high. My dad looked like a fatigued tsunami survivor upon exit and like he didn't have a clue where he was. Poor sod." You might think this insistance on water for washing is peculiar for a religion founded in a desert but Islam has an answer for every eventuality. If you haven't enough water for wudu you do tayammum before prayer: using clean soil or sand for a 'dry ablution'. Think what you like about intolerance in the Islamic world, The Book has all sorts of compassionate, pragmatic solutions to everyday compliance problems.
Posted by BobTheScientist at 07:41