Well Science Week is wrapping up now. At The Institute I've been at a parcel of events and not one was a sleeper. Thursday night, they scheduled a Pub Quiz in one of the local hotels. A round dozen of our science post-graduates stepped up to the plate and found €20 a table for a night out with the grown ups. Otherwise the demographic was really top heavy with crumblies. It is ever thus: our younger colleagues have family commitments with small and medium sized children. Me I do love a Pub Quiz - it is one of the few situations where my very expensive education can be run through its paces. The quiz was sponsored by Science Foundation Ireland SFI (finger food bring on the orange goujons and, weirdly, fireworks) but raising money for Camara a charity that takes old computers, reconditions them and recycles them out to the third world. Back in the day, when I worked in St Vincent's Hospital Dublin, the IT guy was from Uganda via Botswana. He was entirely and comprehensively dismissive of Camara at the time: "we may be black but we don't want or need your elderly tech kit; just like you we want the latest thing: antiques are clutter". My Pal Terry thinks otherwise and has done at least one stint out in the Horn of Africa training up the local kids on Camara computers.

Mais revenons a nos pub quizzes this one was 10 rounds of 10 questions to make the scoring easy.  As happens when you have such a Works do, you tend to lose autonomy about who you share the night with. Ideally, a team wants
if you can't draft a dream team you have to pretend that you're only doing it for a bit of craic and don't care if you win. I spit on that sort of nonsense. I don't have very high standards but I try to do my best: lash out my pub-quiz knee-jerk answer but then have a bit of a think and a bit of discussion about it - keeping the grey cells warm y'know. And it is considered extremely bad form to dispute any answer with the Quiz Master even when it is a) wrong or b) ambiguous because of a sloppily worded question. I cannot remember more than a small fraction of the questions, which were the usual sort of forgettable thing. But one of them was "Which member of The Police has a degree in astrophysics" My knee-jerk was Brian May, but my team said that he was in Queen not Police and opted for Sting. That question was rather quickly withdrawn because the QM didn't know one authority-named 1980s band from another : silverbacks have their day . . . in the 1880s. But I kept the Dingbats sheet, filleted it and share them with you now: 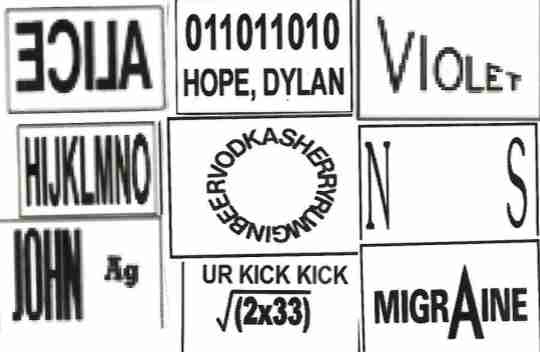 They are a fair mix of the usual cannon-fodder and some which took a bit of time and a flash of insight. We collectively got the 011011010 and the circle below it wrong, wrong, almost right. Give it a go: answers below the fold
Alice through the looking glass; bits and bobs [we tried 'a couple of bob']; shrinking violet

water (H to O); round of drinks [we tried 'a drinking circle']; poles apart
Long John Silver; Get your kicks from Route 66; splitting headache