They say of Ireland that we have weather not climate to indicate how marvellously unpredictable the weather used to be. 30 years ago we spent a week on the Shannon in a rented cruiser. It was Easter week, the first week when the commercial ventures opened up for business. It was great fun acting the Captain Haddock but The Boy spent almost the entire trip reading books in the forward cabin rather than watch the river bank chug slowly past.  We had everything that Irish weather delivers: balmy spring sunshine, horizontal snow, 2m waves, drumming rain, whippy wind, brilliant sunsets. Nowadays the weather, all satellited up, is more predictable but, if you believe in climate change, less reliable and more wildly fluctuating: more flattening storms, more frost-free Winters, more soggy Augusts.

These extremes are not limited to Ireland and systems created to deal with reasonable alternation between hot and cold, rain and shine, are now found wanting. This year, the Oroville emergency spillway only failed because it was put to the test for the first time in 70 years; because the precipitation in California went from years of drought to months of relentless rain. The reservoir behind the dam is designed to flatten out the fluctuations in water availability but that creates a huge surface area from which the precious water can evaporate. How much does water cost? As one Irish politician recently claimed "it doesn't fall from the sky" and in the Boston surburbs, it costs $5.84 per HCF [hundred cubic feet = 750 gallons =~ 3000 lts = 3 tonnes] . So if you got to the trouble of gathering the stuff, you don't want to [not] see it evaporate back into the sky. 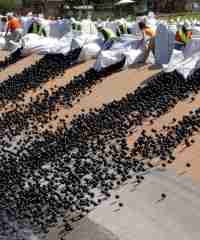 Here's a solution: cover the reservoirs with hollow black plastic balls: 96m balls apparently save 300m gallons water evaporated. Each ball is made of polyethylene PE and costs $0.36. They are part filled with water as ballast so they don't all blow off the lake in the next gale and convert a down-wind shopping mall into a ball-pit. Bloomberg reports.
. . . and the maths:
Loss: 300m gallons at 0.78c each gallon = $2.33m
Cost: 96m balls at 36c = $34m
Even if we are wildly off with the cost of lost pre-treated water it still looks like the pay-back time, for millions of balls to retain more of the liquid resource, is about 15 years. Doesn't seem like a good deal to me. And there are probably unintended consequences of preventing light get access to the water.

Sometimes you have to think outside the box . Here are some more not so nutso ideas.