On growth and form

Did I mention allometry at all at all? I did, once, just last year. What is it about the control of development that make men have bigger feet than women? It's hard to see how this could be adaptive and goes some way to explaining why teenage boys are apparently so clumsy: for a time they literally don't know where the ends of their legs are - their proprioception [defined/explained] is overwhelmed by the differential growth. It happens to girls too; some >!brilliant!< ten year old gymnasts and ballet-dancers lose it entirely when the hormones kick in - trading in the leotard for spots and an awkward boy-friend probably seems a piss-poor exchange to their parents and teachers. But the realisation that women have daintier feet than men have led some cultures to exaggerate this attribute of femaleness by binding the feet of girls so that never develop properly.  Very attractive until the poor creature takes off her socks [don't look if you are squeamish]. 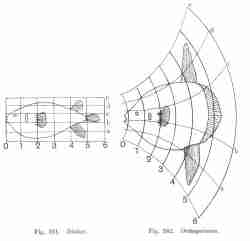 El Asturiano [multiprev: he really is my most valuable supplier of links] sent me a link to a marvellous Wired tribute to D'Arcy Wentworth Thompson a Victorian polymath and scholar who is now only famous for On Growth and Form. The long discursive essay is written by Stephen Wolfram [bloboprev], who is another mighty intellect with diverse interests . . . and a poorly developed Off-button. OG&F explored the topology of shape and how the endless forms most beautiful of the natural world might have been generated. We are all, after all, variations on a theme. I think it's true to say that, at some stage during their embryological development, all mammals have four pentadactyl [five fingered] limbs. However, adult horses walk on a single toe-nail, cows on two and whales have no toes at all. The extra digits have been re-sorbed and re-purposed. In the Figure [L] you can imagine how a regular shaped fish can be morphed into a sun-fish with a single instruction - more cell-division astern.

I mentioned OG&F in passing in a tribute to Alan Turing who made a key contribution to the study of how development and shape might be managed chemically. Something is happening to dictate that we can clap . . . because our two arms are the same length. Presumably some feed-back loop ensures that the arms get longer in sync. Allometry is the investigation of differential growth. Been there before with the idea that a new-born's head is bigger than its legs and our growth and development is the progressive reversal of that ratio. Stephen Jay Gould [prev] started a famous discussion about the disproportionately mighty size of the antlers of Giant Irish Deer [not elk! and not exclusively Irish, either but now for sure extinct]. He pointed out that, before telling a story to explain the size, you should acknowledge the possibility that it just happened because of allometric growth signals. Big deer produce bigger antlers by the same mechanism that boys produce bigger feet: the differential expression of growth hormone. Such mechanistic explanations are an essential foundation for any theories about why the antlers grew so big and what the consequences were. Yes, they're all dead, sure, but what was the immediate cause of their demise?
Posted by BobTheScientist at 07:38