In Ireland Science trumps Arts financially by about a 3:1 ratio [figures prev], but in terms of media coverage and political leverage, the Arts are waaaay ahead. That's partly because the cliché artist is a flamboyant non-binary person wearing a brilliant silk shirt and declaiming to an audience . . . while the cliché scientist is a sad chap in a white coat who mumbles Greek and smells of sulphur. Culture and society to exist requires that we lean towards our stereotypes even if we kick against conforming thereto. Over the last several years, Science is pushing back on the publicity front, not least because the majority of politicians are publicans, farmers, bookies and auctioneers and we need to make our case to them. With words and concepts that theym who hold the purse-strings, can understand: not knocking or sneering here - normal people have a different vocabulary and have a different skill-set. I couldn't, not to save my life, repair a salmon weir or safely operate a back-hoe. Accordingly, today marks the launch of Science Week, which runs for eight days - 12th-19th November - because scientist can't count. I'll write that again:

Science Week Ireland 12th-19th Nov 2017
There are events ALL over the country event in counties that don't have an obvious Science nexus like a Google office, a University or The Institute. Check out something near you or be prepared to travel to something more interesting a little further away. I'm not suggesting that my readers from France hop on a Ryanair flight for any of this but you might have a glance at the types of events which are going down and arrange to do similar in Montpellier. Same applies in Seattle and Gdansk.

At The Institute we have a young engineer who is coordinating events and he's asked us to participate in a Science Outreach project for the Twitter generation. I know from an analysis of the page-view that few enough readers make it to the end of any of my 6-700 word Blobs and nobody follows the links. We were asked to write a 100-word + 3 picture biog of an Irish scientist: a list was provided in case we didn't know what "Irish" meant. Turned out 'Irish' = 'born in Ireland', so George Boole the 1st Professor of Mathematics at Queen's College, Cork (now UCC) was excluded despite working there for the final and most productive 15 years of his life. But his daughter Alicia "Four Dimensions" Boole was included despite leaving Ireland at the age of 4 and never looking back.  I snagged Jocelyn Bell Burnell because she has already featured on The Blob and I though I could summarise her contribution in 100 words. Actually that's hard: you have to leave so much on the cutting room floor that it seems almost insulting. ANNyway: 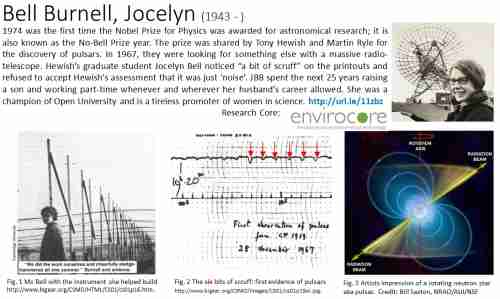 Then I bridled at some missing data. First there was Dennis Burkitt, Enniskillen's most famous son, who is the poster-boy for noticing an anomaly and asking Why? That's good working definition for what science is. I' am sorry to say that I had to edit Wikipedia to include DPB Burkitt has been Blobbed as well. But the edit to 100 words was no easier: 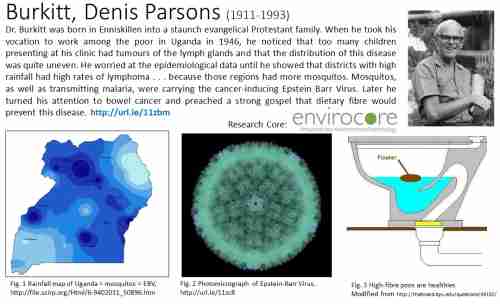 Those two are really Obvious to All Historians of Science OTAHoS but this sort of showcasing is an opportunity to give the dead-and-buried-and-forgotten an airing to catch the visiting know-it-alls with a salutary "well I didn't know that". Accordingly I made a précis of my piece on Maude Delap. 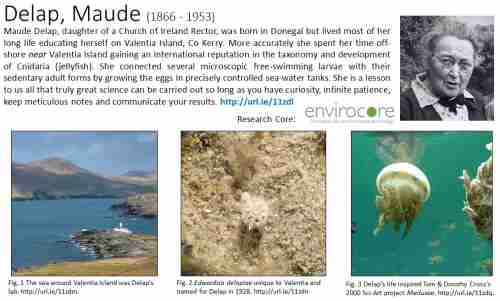 I'll be interested to see how these essays get edited because the rumour is that all 40 short biogs are going to be cast as triangular panels on the inside of a geodesic dome which has been assembled in the main courtyard of The Institute. There are names on the list, whom even know-it-all-Bob hasn't heard, so I'm really looking forward to the exhibition.
I hope y'all have as much fun during Science Week as I intend to.


Posted by BobTheScientist at 07:58