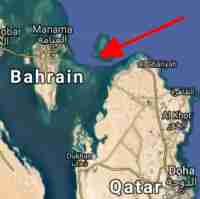 Well Märket's partition was obsessive but at least nobody came to blows about that tiny piece of real estate. More posturing is under way in the Persian gulf over a much smaller cay Qit'at Jaradah located midway between Qatar and the island state of Bahrain. Bahrain claims that it is 12 x 4 m [about the footprint of our modest house] at high-tide and a massive six soccer pitches at low low tide. Not every high-tide though!: most high-tides completely submerge the sand and coral, and this fact should cause its rejection by normal definitions of 'island'. "Not an island" is the case made by Qatar. When the Brits were throwing shapes in the area, they got the British Maritime Boundary Award to assign The Dampness to Bahrain. In 2003, this ruling was upheld after some, ultimately ineffectual, pleading by Qatar in the International Court of Justice. You can read <TMI alert> most of the legal niceties here.
Wikimapia solicits comments in English but has so far only gotten local commentary which sums up three political positions w.r.t. this rarely dry 'island'.
You may be sure that the wrangling over who owns this postage stamp sized piece of real estate, is little enough to do with the coral or the gulls which occasionally land on it. It is much more likely to establish mineral or fishing or oil rights in the seas surrounding the dot in the ocean.

Islands? We have loads more.
Posted by BobTheScientist at 07:42