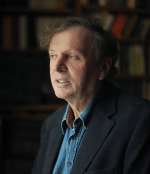 Rupert Sheldrake cruised over my horizon recently as link from my friend Brian who looks a bit like Sheldrake, and is similarly ready to embrace the strange. Sheldrake is a rather distinguished scientist: but not in the sense that they've asked him to join the FRS boys-club or laid a Nobel Prize in his lap. Maybe distinctive is the word I'm looking for? Not many of us scientists has got on the tits of the establishment so much as to have their TED talk relegated to a broom-closet on the TED website with a Nutjobs Adults Only sign on the outside. How many have riled up the Editor of Nature John Maddox so much as for him to say "I was so offended by it, that I said that while it's wrong that books should be burned, in practice, if book burning were allowed, this book would be a candidate"?  Not many, not me: hence distinctive; an outlier. I've mentioned him a tuthree times before. He has a new book out: Science and Spiritual Practices: transformative experiences and their effects on our bodies, brains and health and he's been out and about promoting it.  He enumerates 7 spiritual practices, and you and I both will have to wait to read the book to see where the science fits in.

I am particularly interested in the last chapter because a) I'm a scientist and b) after I walked back to France from Santiago in 2004, I wrote a short book Santiago! 800,008 steps along the Camino or Santiago; an analysis of the process of pilgrimage. The contents gelled, from the turmoil of my pilgrimage experience, over a weekend in Bidarray [split by the Pont d'Enfer shown R] in the Basque country but the title changed depending on how pretentious I felt.  My journey was about 800km or 800,000 paces, the 800,008 was a cheap-shot hats-off to the Buddhist idea of the Nobel Eight-fold Path:
There is a certain amount of overlap between Sheldrake's dissection and mine. In his video on pilgrimage explains how the process / practice of pilgrimage: walking with a purpose; walking with others; getting outdoors will help towards getting inspired and getting happier and healthier. Pilgrimage is not [any longer] associated with a particular religion; indeed you are requested BYB bring your own beliefs.There is even a quintessentially English group called the British Pilgrimage Trust  BPT which will source a track / way / camino for you, near you. 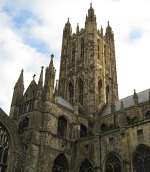 A few years ago, Sheldrake proposed to walk to Canterbury Cathedral with his 14 y.o. godson. At least partly because he has made a resolution not to give more Stuff to anybody he knows or cherishes. Somewhat to Sheldrake's surprise the youth replied "I can". And they did, starting a country 8 miles / 13km from the city and walking towards Bell Harry Tower, [R from up close] which is 75m tall and can be seen for miles. On arrival, they paused for a cream tea because 14 y.o. boys are a bottomless pit for calories especially after some exercise. They then attended choral evensong as a spiritual reward for their slight enough pilgrimage.

I've been there, then, 100+ times, attending choral evensong in the crypt of Canterbury Cathedral singing The day thou gavest lord is ended and Abide with me. If anyone thinks that the Protestants don't have the best songs, they are welcome to make a comment below. I was there because it was part of my very expensive education along with Latin, team-sports, biology and an 800g-loaf-and-a-toaster-a-day . . . and finishing up an emotional cripple!

If you want an hour more Sheldrake, and can tolerate Russell Brand, you can listen to them chatting in a studio interview.  Sheldrake's controversial position is anti-materialist and suggests that some thought patterns can become stronger through 'morphic resonance'. He suggests that the Times cross-word is easier on the train home because loadsa people have struggled over it all day. People all over the world, independently sending out vibes. Conventional materialist scientists just cannot accept this but are quite happy with other forms of magic like radio transmission and Schrödinger's cat. One peculiarity of data is that IQ scores have gone up by about 30% since they were invented 100 years ago. We all know that folk aren't cleverer than their grandparents, or if they are evolution doesn't work that fast. Morphic resonance explains the increase rather well although we are still hazy about the mechanism. Other explanations for this 'Flynn Effect' scrabble a bit citing better nutrition and more reading.

The thing that has really riled up regular science is Sheldrake's assertion that the speed of light in a vacuum - one of the great central cosmological constants - is not constant. Unbiassed estimates of this statistic have varied by as much as 20 parts in 299,792,458 m/s which says that the terminal 58 should be rounded off, for starters. Sheldrake won't suggest that physicists have fudged the data to get everything to agree; no, but he will suggest that "intellectual phase-locking" is going down. A sort of morphic resonance; but he would say that wouldn't he?

The chat bounces along between science and religion in a rather civilised way not least because Brand sees himself as "being quick to see that religious people are right".  If the physicists, or at least their results, get more like each other as time passes, so the spiritual side of humanity might be using
their rituals to entrain morphic resonance. Singing the Nunc Dimittis together at evensong makes people more Christian and maybe better people. Brand neatly wraps it with: "there yer go: more cathedrals fewer iPhones but you're probably not listening to this on a cathedral".
Posted by BobTheScientist at 07:42