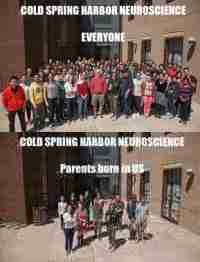 Here's a compelling graphic to show how much ace US science labs are dependent on Foreign Johnnies. It might be called the incredible shrinking lab as it flicks from all the workers to USCs to those born in the US to those whose parents were born in the US. I've captured the two extremes [L]. Those remaining native North Americans look pretty lonely and isolated, don't they. Can they do, even pro rata, as good science as the larger and more diverse body can? I don't think so and there was an editorial in Nature at the beginning of October which hangs some flesh on the basic story. If you follow the links in that piece you'll get some citation analysis to show that scientists who move countries make objectively better science than stay-at-homes. It's not that any old Syrian or Cambodian will boost your Institute's productivity; it's more likely that people with enough ooomph to up-stakes and go abroad will have extra energy and smarts and therefore be an asset. But I'm sure it is a benefit to have a cultural mix in any creative arena. If French people think differently or have been trained with a different skill-set then they will have a disproportionate impact on their colleagues. It's as if they were southpaws, who do so much  better than average in a variety of sports.  And of course I've cited Caitlin Moran noting countries which fail to cherish or equalify women, blacks, gays . . . are stupider: because they thereby reduce their pool of talent.

On this Thanksgiving Day, I'll acknowledge with gratitude the 4 years I spent in graduate school in Boston. At many levels they all took me in and embraced me and educated me and taught me manners. My gaffer and his family literally took us into their home; the student body, my peers, treated me as an equal and an asset; my professors cut me no slack in standards or scientific rigour and valued my slightly different outlook and background; the [mostly] ladies in the office just loved by European accent. What really surprised me and made the whole venture possible was that I was awarded a Teaching Fellowship TF which a) covered my tuition fees and b) settled on me a modest stipend on which, with extreme economy, I could live. They could have reserved that for US Citizens only and soaked me for fees the way my current employer looks at Chinese and Malaysian students as a herd of cash cows.

But I suggest that I was a good investment, because I was to a certain extent the grit in the oyster, alien and different, who helped to bring about a few pearls - a few scientific publications and a LOT of data which wouldn't have happened without me. And I've spent the rest of my life as an ambassador for the US and its ways of doing. I mourn some of the political changes that have happened since I left, especially the current wall-building, exclusionist, racist and nationalist aspects of the current regime. Give me your tired, your poor, your huddled masses yearning to breathe free . . . and they will repay you in spades with better, more creative science.

Sorry to go on about it but Ye true story of Alice's Restaurant.


Posted by BobTheScientist at 07:50