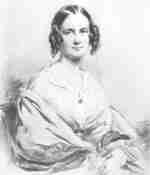 I've just finished Edna Healey's 2001 biography of Emma Darwin née Wedgwood [R while young] which fills in a lot of the details of Charles Darwin's domestic life. Emma was remarkably well educated for her time and even for her class: she was fluent in French and Italian, better than competent on the piano. The book is an easy read because it's well-written - Edna read English at Oxford - but confusing because all the relevant families had enormous numbers of children including at least one girl called Fanny. Charles and Emma were first cousins, his sister married her brother; another of his sisters married the man who had married another sister of Emma, Not quite like Tom Lehrer's [sing it!] Oedipus Rex:

Yes, he loved his mother like no other
His daughter was his sister and his son was his brother
but close.

In those pre-TV days, much of the family entertainment centred reading aloud, music or playing cards. Most nights Emma and Charles played backgammon and if she won he would declaim "bang your bones" in a good-natured way. Although the modern ahem meaning was opaque to Edna Healey let alone Charles and Emma, it does suggest that the couple repaired to bed immediately after the game. Poor Emma's victory at dice meant another tedious pukey pregnancy and a painful and difficult delivery. In invention of obstetric chloroform by James Young Simpson on 1847 was eagerly embraced by the family. Darwin was sick for much of his adult life and worried that some of his health issues popped up in his children . . . because of the inbreeding. For a smart chap he doesn't seem to have made the connexion between banging her bones and another child 40 weeks later. Their last child Charles Waring Darwin was born 1856 with Down's syndrome when Emma was 48. Poor scrap only lasted a couple of years before dying of Scarlet Fever. Between CWD and the next oldest child, Horace b. 1851, Emma suffered two miscarriages.  In all she bore ten full term children.  The death of Annie, who died tragically at the age of 10, knocked the stuffing out of her parents, especially Charles who couldn't accept that there was any hereafter. Her story and her influence on Darwin's thinking were neatly captured by Randall Keynes (a descenant of Emma and Chas, in Annie's Box - reviewed - available £1.20 +p&p.  Edna Healey's book is £0.01+p&p even cheaper.

The Emma Darwin biography is quite heavy on the perpetual feeling-crap that everyone in the household experienced. Emma had her migraine and miz pregnancies; Charles his flatulence and gut-pains and vomitting; but most of the children also seem to have been off their food and generally unhealthy a lot of the time. Quite apart from the crises of scarlet fever, diphtheria, consumption and measles. Vaccination and peak antibiotics have spared us endless anxiety as parents - even the anti-vaxxers who are coat-tailing on herd immunity. But the enumeration of symptoms doesn't get definitively to the heart of Darwin's Illness. Was it Chagas Disease from his encounter with a Brucid beetle in South America? Or was is mere hypochondria?  After reading this biography, I tend to think that if was all of the above. It reads like many people, not just the Darwins, felt rotten much of the time. What is striking is the devotion that the less ill showed to their sicker relatives: all those bodily fluids to be disposed of. Not all of that could be off-laid on devoted servants.
Posted by BobTheScientist at 07:35