Walden One:
In 1845 at the age of 28 Henry David Thoreau built himself a wendy house in the woods South of the town of Concord Massachusetts.  He lived there for two years and paid attention to the natural world that surrounded him.  Purists get snitty about his achievement in the same way that regular people get shouty at vegetarians for wearing leather shoes.  "Oh it was only half an hour from his folks' place and he took the laundry home every weekend." ". . . and he bought supplies at the store before he walked back to his hut" "He had visitors! not much of a hermit was he?". He wrote up his experiences in Walden, or Life in the Woods, which finally got published in 1854, which was tribbed on The Blob this summer. Indeed Walden the book is rather like a blog. It is a book much quoted but rarely read and used to project unreader's anxieties and certainties onto a backdrop of second-growth New England woods.  But it is what it is: one man's attempt, which may not be exactly consonant with yours, to make sense of his life.  I think, I believe, that young men and women need to act on Thoreau's opening sentiment before they let the life into which they were born dictate what happens to them. “I went to the woods because I wished to live deliberately, to front only the essential facts of life, and see if I could not learn what it had to teach, and not, when I came to die, discover that I had not lived." If they don't they are likely to join “The mass of men [who] lead lives of quiet desperation."

Walden Two:
Is a book, a novel, a manifesto by the behaviorist BF Skinner. Skinner spent a large part of his life trying to understand how humans and other animals operate.  He was a reductionist, knowing that trying to make sense of the blooming buzzing confusion that is the external world is difficult so needs to be simplified. Actually for most of us, blooming buzzing confusion descibes our interior world as well.  But not for Skinner. He carried out numerous experiments on rats in cages and clocked the number of times they pressed a lever when offered good or bad things. His findings were reliable and reproducible and we now know rather a lot about how rats behave when their world is reduced to a plastic box proportionately the size of Thoreau's hut. Skinner's confusion then dropped away and he became certain that what happened in the box could be extrapolated to more complex situations. Up to a point, that is true, but his vision of the world, described in his Utopian novel Walden Two, is rather creepy. It's a long time since I read it, but if you try to grasp things like happiness and productivity what stays in the hand is a dead thing choked by the clumsy process of measurement: all that is worth living for has drained out between our clutching fingers. Oscar Wilde: "Education is an admirable thing, but it is well to remember from time to time that nothing that is worth knowing can be taught."  Me, I've never seen what connexion Skinner felt there was between his book and Thoreau's, but I bet he was certain-sure that the two were linked. 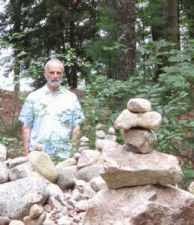 When shall we three meet again? We've been in Massachusetts for more than a week now and our friends-and-relations have been asking us if there is anything we want to do. Boston is one of the great cultural and intellectual centres of the USA, if not The World.  We lived here for several years a generation ago and have visited often in the interim, so we should have a list of places to see and things we want to do. We are hopeless tourists and really just want to hang out on the stoop or round the kitchen table yakking and drinking tea.  But a couple of days ago The Beloved confessed that she'd never been to Walden and we were whisked out to Concord by our friend P.  Walden pond is now a State Reservation and available for a strange mix of recreational activities: you can canoe but not sail, electric boats are okay but petrol-driven boats are verboten. Fishing is good but dogs are banned. You can't ride a bicycle but I saw horse-shit in the woods. They have created a replica of Thoreau's hut right in the parking lot beside the ice-cream truck, so pilgrims don't need to go out into the woods at all at all, they just need $10 to park their vehicle.  But if you do go along the edge of the pond, stepping over the bodies lying on the muddy sand of the beach, you quickly reach the site of the original shed.  Despite the injunctions not to step off the path and actually into the woods, and the mill of people, and the granite plaque set into the ground behind the site helpfully identifying "Thoreau's Woodshed" the experience is rather wonderful. Nearby there is a heap of stones and people have piled these into little ziggurats and towers to show that they were present long enough to make a small difference and by implication that the site had made a small difference to them.  One could think of our experience with piled stones climbing to the highest point in England Scafell Pike 25 years ago. Alternatively you could reflect on La Cruz de Ferro which is a huge iron cross driven into a heap of stones between the villages of Foncebadón and Manjarín on the Camino de Santiago. I'm glad I went to Scafell, and was transformed by walking the Camino, walking to Walden was somewhere along that spectrum.

Posted by BobTheScientist at 01:01