This year at The Institute, my colleagues have parlayed a set of degrees in Sporty Things into a new MSc in Strength & Conditioning.  The first students are now enrolled and they are ready to rumble.  To launch the venture they asked a couple of Names to come and address all the students and any interested staff.  The auditorium was packed with bright and mostly fit youngsters both staff and students and I was the oldest person there by a country mile.  I teach a couple of sections of Intro Biology to Les Sportifs and I have explained to them that as far as sport was concerned I am welded to my sofa while I reckoned the only contact they had with such furniture was to push one from Cork to Dublin to raise funds for the local Soccer Club.

The first speaker at the S&C launch was Billy Walsh, who was in the news three weeks ago because he was about to resign from being the Head Boxing Coach of the Irish High Performance HP programme since before the Beijing Olympics.  When I was young enough to actually do athletics and afterwards when my residual interest in running and jumping was fanned by watching the Olympics on TV every four years, the Olympics was 'amateur'. The amateurs from the Eastern Bloc were streets ahead of their rivals from Western Europe because they were only nominally in the army or PT instructors - the state made sure that they could devote many hours every week training and practicing. The Western amateurs had to leave training for the weekend or an occasional weekday evening while holding down a proper job in a factory or driving a milk-float.  Sometime between then and now, everyone realised that winning is a) important b) unlikely, unless c) you put in hours and days and weeks and years of relentless weights and runs and lifts.  The Irish Government allocated a tranche of my tax-payers money to provide modest HP stipends to fit and coordinated young people so that they can do training as a day-job.  The way these HP fellowships were allocated by the Sports Council among sports and among competitors within sports seemed to be, shall we say, a bit random.  There is big money to be made from sport but only very occasionally by the Harry Potter practitioners of each sport.  American University Football & Basketball coaches are, for example, paid more than the College President while the lumpy, agile and fresh-faced jocks get nothing at all.  I've talked about contact sports encephalopathy before and new study has found 87/81 autopsies revealing concussive damage to ex-athlete's brains. 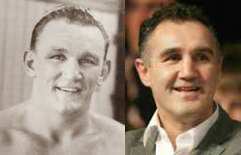 Billy Walsh [L, R] was the man who took all the likely candidates off to boxer's boot camp before the Beijing and London Olympics and put them through their paces and told them that he believed in them and that they should believe in themselves. And the kids came through; winning 3 medals in 2008 Beijing and 4 medals four years later in London. As he pointed out yesterday, since the foundation of the state, Irish athletes have won a total of 28 medals in all categories including John Treacy and  Ronnie Delany, whom we've met before. 25% of those medals had been won under his tutelage in 5 years. That's a striking achievement by any measure. In answer to a question from the floor, he said that Katie Taylor is the most extraordinary boxer he's ever had dealings with. This young woman can always find it in herself to do better. Whatever challenge she faces and overcomes, she is always ready to turn round and try harder against herself and her own exacting standards rather than against the girls whom she pummels into losing.

I was itching to ask the elephant-in-the-room question about how he reconciled concussion and contact sport encephalopathy CSE with a duty of care to the athletes in his dojo, but thought it would be bad manners to be controversial on such a big day for my sporty colleagues. I was glad, therefore, when one of the students asked what Walsh felt about the removal of protective head-gear from amateur boxers a couple of years ago. Well, Walsh was amazed that such a diktat had been issued by the International Boxing Association (AIBA) and frankly unable to comprehend their motives. On his watch over boxing in Ireland he knew of 2 concussions in ten years when head protection was required and 10 concussions in just over 2 years since bare-headed boxing was agreed. Larger samples indicate that concussion is paradoxically less likely in helmeted bouts that unprotected ones. hmmm, I dunno; I think the TV networks will have had something to say about how the spectacle is improved if the viewers can see the blows land directly between the eyes ad-breaks.  I've used Katie Taylor's unexpected success as a vehicle for denouncing boxing as a sport with all to much in common with the circus of Caligula 2000 years ago.  Do you notice an uncanny similarity between Billy Walsh [L above, R] and Ernie Schaaf [L above, L] who went into a coma from injuries sustained in the ring in 1933 and never recovered?  Such a nice happy-looking boy that Ernie - he was only 24 when he died. There are surely less bloody barbaric ways to shine in international athletics - Katie Taylor has played soccer for Ireland for example.
Posted by BobTheScientist at 07:02