There I was talking two years ago about the the beautiful but poisonous koraalduivel lionfish Pterois volitans [R with a scuba-diver for scale: it's about as big as your head] as an invasive species in Florida. I knew this voracious predator quite well when I worked in the Zoo in Rotterdam cleaning aquaria and sweeping the floor. I mentioned the species recently as an example of why releasing pets into your back garden when you are bored with them is a Bad Idea. I've been having a bit of an update on lionfish and what can be done about them. Here's an map for the status of the problem, each dot from Connecticut to Curacao is a sighting of feral lionfish: 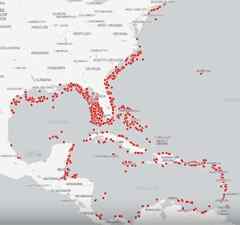 There is no hardship which people won't go through, no ingenuity they won't mobilise if they can make money out of something.  A market is often a far better incentive than a bounty. Bounties didn't work for foxes Vulpes vulpes in Victoria, Oz; they didn't work as well as a hideous virus for 'controlling' Tasmanian Devils Sarcophilus harrisii.
We don't have to kill every Atlantic-side lionfish, we just have to bring their numbers into line with a bit of judicious disease or predation to give the local fish a fair chance of getting their own genes into the next generation. Shouldn't be too difficult of a task: we've reduced cod morue bacalau Gadus morua from being so numerous that you could walk across their backs from one skiff to another to almost an endangered species.
Posted by BobTheScientist at 06:59