At last! VIBE is about to land in UCD. We, the VIBE community, have been expecting the big bird to land there in 2017 and 2018 because they undertook to bat her down in 2016. When I organised the 2014 meeting, there was, and is, only me to carry it forward. My head of department insisted that I form a committee to help with the logistics but tbh the schedule of committee meetings imposed another, largely unproductive, layer of things that I had to organise. And The Institute contributed bugger-all except the use of a vacation-empty lecture theatre: didn't even stump up a round of tea-and-coffee without I pay for it . . . and I made the flapjacks myself. I suspect the UCD cyclical no-VIBE no-VIBE vibe was/is because there are three Professors of Bioinformatics or Molecular Evolution all with international, not to say stellar, reputations. Organizing a mere international meeting is a low priority and so falls between [three] chairs.

Whatever; I am looking forward to Being There on Friday 22nd March because these are the people I've been teaching; collaborating with; employed by, for the last 30 years. It is a racing certainty that I'll be the oldest person there but I'm not expecting to be recognised. That's because my academic career has been earth-bound rather than stellar but also because of the rapid turn-over of Effectives in any scientific field. There will be Young Turks who were in short pants at the last VIBE meeting in 2016 who are now at the top of their game putting the final gloss on their PhD thesis. They will never know as much about their research field as when they write The End on the last page of that PhD thesis and take it off the the printer. I imagine that, with at least three research groups [to match the three Profs], there is critical mass and synergy in UCD so every there knows everyone else. But let's hope the hosts are not too cliquey and inward-looking: us boondock binfos need to feel welcome.

👁 kneed a name badge on my left tit [there is a sign language joke] with Bob Scientist  in large print and The Institute in slightly smaller font underneath. To the nearest whole number nobody else will think to perform this courtesy for other delegates. You need to be able to casually scope out to whom you are talking: you had a really interesting talk with them 3 years ago; but who in heck are they? Last meeting I went to [nit VIBE], name badges were supplied on an A6 card (with the programme on reverse) on a lanyard to dangle just above everyone's toolbox [same joke] - not the best way to promote neutral social information gathering if you have to stare are folks' groin to work out who they are.. I certainly don't expect people to know my name and I intend to quiz the youngsters closely about their research presentations. That being the appropriate role for a olde codger Senior Scientist. 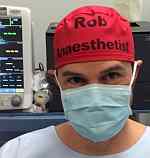 I got into rant mode here [not sorry] because of a clever not to say life-saving improvement in non-verbal comms in operating theatres. This simple hack was invented by anaesthetist Dr Rob Hackett - put your name and role  Rob anaesthetist in large letters on the front of your surgical scrubs cap! That way you know how to unambiguoisly address the other people in the room - none of whose faces you can see properly. That might make the difference between getting a clamp on in time or just-too-late-sorry. This may remind you of the courtesy of wearing a Hello MY Name Is name badge - and introducing yourself to patients - before carrying out a medical procedure on the patient's body.