Zen and the Art of Going 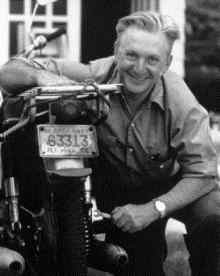 Aieee! Robert M. Pirsig [R with bike] is dead. Guardian - B.Globe - WaPo. One of the truly original thinkers of the 20thC has passed on. I wrote about ZAMM Zen and the Art of Motorcycle Maintenance on his birthday a few years ago. As I do, I sent a link to Anthony McWatt the curator of robertpirsig.org and we had a brief to-fro about Pirsig, ZAMM and MOQ. MOQ is the Metaphysics of Quality and those educated in the school of material things and hard knocks will assume that MOQ is irrelevant to them. Although not a particularly practical person, I don't have much time for metaphysics although it claims to deal with the fundamental nature of reality. You can build bridges that don't fall down and develop new drugs that work without drilling down into the mind-body problem or whether trees that fall in the forest make a sound if there is nobody to hear the crash.  There are levels of abstraction and detail that are appropriate for particular problems: chemistry is a subset of physics and biology is a subset of chemistry.

On his website McWatt quotes an anecdote about Harry Kroto: "At a 1998 presentation in London for the Engineering and Physical Sciences Research Council (EPSRC), Professor Harry Kroto unexpectedly spent his time elucidating the merits of meccano instead of discussing his recent Nobel award winning discovery of Carbon 60.  His argument being that students require tactile experience to know when to stop tightening a screw and computer use alone doesn’t teach this. When asked at the end of the lecture, whether he had read Robert Pirsig’s Zen & the Art of Motorcycle Maintenance (ZMM), Kroto replied: ‘Yes, and that’s what it’s all about!’ " Because ZAMM is the story of a philosopher recovering from madness who needs to keep his motorcycle in trim during a road-trip with his young son. Kroto was making a plea for less book-l'arning and more hands-on in education. Books will teach you why bridges stay up but you have to build one to see how that miracle of engineering works. Because not all structures work as the specs (from a book of tolerances) suggest they should, often because some other factor hasn't been taken into account: resonance from people walking or the wind blowing; cavitation from flowing water; water [or air] hammer; fatigue in bridges; fatigue in planes and ships; expansion of iron oxide. That's why engineers add 50% to the thickness of every structural thing in case they've left something out of the equation.

Harry Kroto, who died exactly a year ago, shared the 1996 Nobel Prize for Chemistry with Robert Curl and Richard Smalley for their work on fullerenes. Carbon60 cited about is a stable spherical structure with 60 vertices and 32 faces - 12 pentagons and 20 hexagons. It's a sort of uber-platonic solid - something like a 12-face dodecahedron and something like 20-face icosahedron. If you think it looks like a modern football, you are exactly on target. Kroto's interest in meta-stable chemical structures created Carbon 60 in the lab and its spectrographical signature was then detected in red giant stars where this enormous molecule forms naturally in the plasma.  Kroto named their molecule buckminsterfullerene in honour of Buckminster "Geodesic Dome" Fuller the guru architect and designer.

ZAMM was so important for me growing up because I lived in my head but also built bodged things. I wasn't very good at either of these two domains: I only built dwarf walls because my tall ones were dangerously unstable and my brilliant ideas often didn't stand up to external scrutiny.  I took from ZAMM the thought that I could find a niche between thinking and doing; between rigour and range. Eventually I found that I could contribute to the Scientific Endeavour so long as I kept out of the lab, where I was often a danger to myself and others. I was never very successful in science because I lacked finish - I went off the boil after I'd had the idea, thought it through and done the analysis but crucially before I wrote it up and published. The rigour vs range is meant to express my woeful record in scientific papers [requires rigour, peer-review and the bottle to keep going through the publication process] compared to The Blob where I can flit from one topic to another on a daily basis and don't get pulled up for being obscure or off-topic.

Here's one consequence of Pirsig's death: 3.5 years ago I said that you could buy ZAMM for $0.01, but the cheapest 2nd hand copy today is 300x more expensive, presumably to cash in on the blip in demand. The interest in Pirsig will wane over the next few weeks as the Next Big Thing seizes folks' imagination and booksellers will have a mountain of copies to shift. There are in excess of 5 million copies floating around, you should read it if you haven't it might change your life and so continue to validate Pirsig's assessment:

I really don't mind dying because I figure I haven't wasted this life.
Robert M. Pirsig
Posted by BobTheScientist at 08:16