March for Science in April 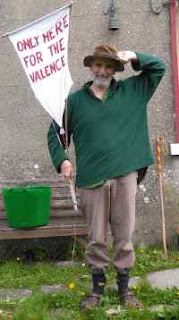 Don't say I didn't warn you because I did, but tomorrow Saturday 22nd April 2017 the March for Science is happening at a venue near you-hoo. The Wexford Science Café agreed to send a delegation to Dublin to start of the event in the heart of the Dublin Digital Hub at 2pm. We the Café scheduled a meeting on Tuesday to arrange logistics, meeting points and the distribution of banners. I was hoping for some practice with suitable call&response and chanting: "give us a T, give us an O, give us anOther, give us a T: what's that spell? TOOT! what's that spell TOOT!]. Well, as you might expect only four people turned up and two of them are going to be unavoidably elsewhere on The Day. I have tried to gee up some sort of response at/from The Institute and on my core-business research mailing list but had more sorry-I'm-elsewhere excuses than I had positive responses. The main response has been a deafening silence. Of course, nobody is answerable to me for whether they go or tarry at home, so I continue to hope that I'll meet loads of my friends, colleagues, collaborators, ex-students and like minded strangers when things kick off after lunch on Saturday.

But I tell ya, boys, if only 30 people turn up the the March it will be a PR disaster for Science in Ireland because the message will be that we're insufferably smug doing very nicely thank you. And thanks for the Government who, through Science Foundation Ireland SFI, has allocated a mind-bending €5 billion to scientific R&D over the last 15 years. Talking of mind-bending, that's €5 billion not spent on mental health and suicide prevention. Or replace that last phrase with whatever engages you this week - refugees, homelessness, cleaning up the police, tuberculosis, opera.

Here's a zoomable map of the locations of satellite marches: only one in Ireland but a few in France.
Here's a Nature series of viewpoints expressed by scientists on whether the March is a Good Thing. There is a disconcerting amount of woolly thinking expressed there. Here's another set of positive assertions from Irish scientists. For less nuance and more soundbite, here is a selection of placards which you can copy, if you lack the imagination to invent your own. In anticipation of a bit of a riot, I've got a back-up poster with the slogan "You'll never take me alive, Cu". And I'm also thinking of writing a message in ASCII, so that only the geekiest will understand the message. One of those qz.com signs is suspiciously close to weforest.org's mission statement Making Earth Cooler.  But maybe originality isn't required so much as a bit of passion and Being There at one of the Marches. I've made my banner out of an old t-shirt, three bamboos, some string and some red poster paint [R held by a daft old buffer giving the science salute, so that others will know that he is One of Us].
Posted by BobTheScientist at 07:45