The Brides of Christ

You may be tuned to the wrong station: Brides of Dracula is in Transylvania.  Brides of Blood is in the Philippines.  And we're not dealing with nuns either; although you're getting warmer in that I'm having a peek at an aspect of Roman Catholic ritual.  Because it is Easter Week and we are coming into First Holy Communion season as we do every Spring when the Irish weather gets marginally more reliable. Mention of the date of Easter will have my Russian readers wondering whether my French readers are in synch this year or not, and vice versa. Yes, in 2017 every Christian in Europe is on the same page for only the 7/17th time this century.

Holy Communion = the eucharist is one of the three sacraments of initiation, happening after Baptism and before Confirmation, for Catholics. For Anglican protestants, the order is different: Eucharist is not available until after Confirmation ca. age 13. First Communion is a ritual that Catholics go through when they reach The Age of Reason. Psychologists of the adolescent mind estimate that this doesn't occur nowadays until about the age of 25. The Church contrariwise believes that 7 year olds (!) are rational enough to understand the doctrine of transubstantiation and thus ready to partake of the blood of Christ. And no, Ignatius of Loyola, founder of the Jesuits, probably didn't say "Give me the child for the first seven years and I will give you the man".

There is quite a lot of preparation for First Communion. When everyone in school was Catholic, the relevant form teacher used to drill all the pupils in their Catechism at a set time for many weeks. The catechism is an exercise in rote learning and IF, after much repetition, you have the lines off by heart THEN you have achieved reason.
Here we go:
That is currently called in question in multi-cultural Ireland. What does the school do with the Protestants, Muslims and Hindus when the Catholics are being drilled? You may choose to believe that a seven year old 'gets' that the deity can see him-or-her but not vice-versa but I don't.

But everyone involved is aware of the money that solemnises the proceedings. So much so that Ahmed and Sanjay go home begging their parents to be allowed to participate. The first communicants are expecting some serious folding money about €450 each on average. That data is a few years out of date; current average is lower but 20% of children net more than €1,000! This is showered on each wee scrap by aunts, uncles, grandparents and other friends-and-relations. You occasionally hear of priggish young whipper-snappers who sententiously assert that they are giving the money to the poor in the Third World and the parents will usually take it for safe-keeping. As school has privileged catechism over numeracy, canny parents can go on the batter with the money while promising Young Sean that his loot is in a savings account. When he asks for access, the parents can always claim that they invested it all in a cunning scheme that went bankrupt. 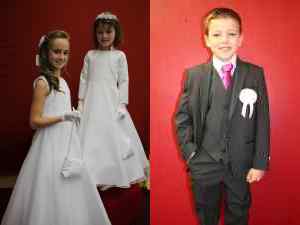 Which is fair enough because the average parent is seriously out of pocket over The Day. The average spend just for the clobber, photographer and treatments is North of €700! And several hundred notes €xtra will be required on a meal and other entertainment. If that sounds painful, you should google up subincision. Even the lads [R, R] tend to get dressed up like a bride-groom or a job applicant. The lassies [R, L] have the full monty: fake tan, a nail-job, hair-styling, white gloves, an inconveniently long dress and a daft tiara. Caitriona Redmond, thrift blogger, has a run-down on where parsimonious parents can get the required stuff a little cheaper. You could try to get through it on less than €100 but your little petal won't speak to you for a week because her street-cred will have gone down the toilet. If this reminds you, creepily, of Little Miss Sunshine then you are in the same boat as me and possibly feeling a little sick.


Posted by BobTheScientist at 07:23