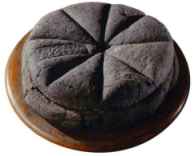 Following on from yesterday's post about baking we'll have a bit of historical research. As I've been making bread from scratch for the last 30+ years and with sourdough for the last 3, I know a bit about the process and am interested in it. So I was delighted to see some very old news brought back to life concerning very old bread. In 79 CE, a baker in the fishing village of Herculaneum outside Naples put a batch of loaves into his oven.  It never got eaten because the village and the neighboring town of Pompeii were overwhelmed by pyroclastic flow when Vesuvius blew its top. In 1930, during careful archaeological excavations, the bakery was revealed with the loaf [R] still in the oven.  A couple of years ago the British Museum asked celebrity chef Giorgio Locatelli to recreate the bread using the best information that we have as to the recipe.  It looks like the circumferential indentation might have been for a piece of string to facilitate carrying the load home with the other groceries. The BM was interested because in 2013 it held an exhibition of the artifacts from Pompeii, including the carbonized loaf. This is preserved in astonishing detail: the string line and the maker's stamp on the 8 0'clock segment saying "Made by Celer, the slave of Quintus Granius Verus".

Baker's stamps were an important part of the trade in bread in ancient Rome. You needed to know that your loaf was authentico, but large and important families would leave their stamps at the baker, so that they could guarantee that they got what they had paid for.  And there was a whole bureaucracy associated with the manufacture and distribution of free bread to the citizens of Rome.  If you've got spare $$$ you can but ancient baker's seals when they come up for sale.

I was just going to slap this up on the 24th August because that's the date of the 1936th anniversary of the final fatal eruption that buried the Roman streets under meters of rocks, ash and pumice . . . except that it isn't. In the stables at the back of the bakery is a heap of fodder for the donkeys mainly beans and oats but also annual herbs that you wouldn't expect in August. And in another part of the site, a lady's purse has been found with a commemorative coin for late September 79 CE.  Other preserved bodies are found dressed in Winter woollies rather than a light Summer chiton. The fossilised food in the market spoke October rather than August. The known direction of wind from the distribution of fallout is not typical of August and agree with a long term study of weather records from meteorological stations in Rome and Brindisi from later in the year.  All that weight of evidence against a single line in a letter from Pliny the Younger to Tacitus saying that the disaster occurred "a.d. IX kal. sept." [nine days before the 1st of September].  Occam's Razor indicates that the standard date is more likely as a typo for a.d. IX kal. nov. or less likely a.d. IX kal. dec.  and that the eruption happened on the 24th October or 24th November. Pliny's uncle Pliny the Elder, the local admiral, was the most famous casualty of the eruption succumbing to ?fumes?asthma?corpulence?stroke? while on a search and rescue mission that got bogged down in the maelstrom.
Posted by BobTheScientist at 06:30