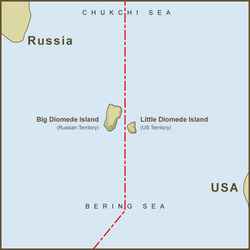 On the Feast of St Diomedes 16 August (O.S., 27 August N.S.) 1728, Vitus Bering sighted a couple of specks of land almost exactly halfway between Siberia and Alaska.  Bering was an interesting guy, who had been born in Denmark but was was a serving officer in the navy of Peter the Great, Tsar of all the Russias. They had been visited in the previous century by explorer Семён Ива́нович Дежнёв Semyon Dezhnev but Bering got the rights for the naming of parts: Bering Sea, Bering Glacier, Bering Strait, Bering Land Bridge etc. In those days the whole of the Northern Pacific was a) cold b) sparsely populated and c) Russian. In the aftermath of the Crimean War, the Russian government felt its lines of communication were over-extended and wanted to divest itself of its American territory before it was seized by the rapacious Brits. In 1867, US Secretary of State William H. Seward wrote a check for $7.2 million and thereby acquired another 1,518,800 km2 of territory. This act precipitated the confederation of Canada later the same year.  The treaty of 1867 specified that the international border should run midway between the two members of the Diomede archipelago. When people started to care about these things with the growth of rail and then plane travel, the International Date Line made a big jink East to follow the established political boundary: the Diomedes are 169oW.  This leads them to be rather romantically called Tomorrow Island and Yesterday Isle.

They have a clatter of other names:

"Big" Diomede is a bit of a boast because it is only 29 km2 in extent, dwarfing its 7.3 km2 yankee neighbor.  But Little Diomede is infinitely more populous because all the resident Inuits were shipped off to mainland Siberia after WWII so they wouldn't get in the way of the military base that was established to see off any invasion of Mother Russia by the evil capitalists. The 150ish people of Little Diomede live in a set of tin sheds clinging to the base of the cliffs. The school is ever and always trying to recruit teachers because turnover is high.  Most winters the sea freezes over between the two islands which paradoxically makes them more accessible because an airstrip can be built to bring in small planes full of canned goods and consumer durables.  Otherwise it's a diet of crabs, seal and beluga whale Delphinapterus leucas blubber.

On 2nd April 1986, a free spirit called John Weymouth turned up on Little Diomede and decided to walk across the ice to visit Russia.  He was arrested, shipped to Magadan, questioned for 2 weeks, dismissed as "no threat to the People's Paradise" and helicoptered back to Little Diomede. It cut both ways though: on 23rd April 1989, when the Cold War was turning luke-warm, a Soviet delegation trudged across the ice from Big Diomede to negotiate a more benign regime for the local civilians w.r.t. fishing and visiting. Two young Moscow journalists, Anatoly Tkachenko and Alexander Genkin, had finagled their way into the entourage with the express purpose of defecting to the West. At the edge of the mill of dignitaries they spoke to a National Guardsman and were "look up there!" spirited away to a safe house on Little Diomede and later to Anchorage, Alaska.  The Soviets, possibly in a vodka-induced haze after an 8 hour 'session', were persuaded that they had miscounted the size of their party.  This was all made a little easier by the escapades of Lynne Cox a long distance open water swimmer - sort of a wet Scott Jurek - who on 7th August 1987 [28 years ago today!] swam the 4km strait between the two islands. POTUS Ronald Reagan and Soviet Premier [or more formally Генеральный секретарь ЦК КПСС General Secretary of the Central Committee of the Communist Party of the Soviet Union] Михаи́л Серге́евич Горбачёв Mikhail Gorbachev issued approving press statements. You have to hand it to such people, I couldn't even move my arms in water at 5oC.
Posted by BobTheScientist at 09:17