Try this for size 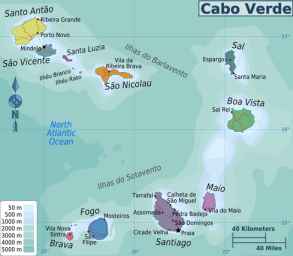 Years and years ago, my boss, his daughter and I were on a field trip to The Azores, Cabo Verde and the Portuguese mainland. We hopped about the islands of Cabo Verde by plane because the tickets were absurdly cheap and were too short of time to be cruising about by local ferry. Arriving to the broiling dry heat of Sal, the international terminal, we hung around waiting for the short-hop prop-plane to carry us to Praia, the capital on the island of Santiago 200km to the SW.  We amused ourselves by looking at the local people (the landscape was an uninviting mix of sand, sandstone, salt and salt-bush). One woman dominated the scene - an enormous black woman in  a wide black dress decorated with a discrete scatter of black sequins. We dubbed this redoubtable Cabo Verdean fellow-traveller "Her Vastness" and speculated whether the engineering of the seats of the small plane would be up to the challenge. Imagine our chagrin, and indeed anxiety for our knees, when she sat down into the row of seats in front of us. The seats gave ground with an ominous creaking sound . . . but held. My friend El Asturiano's grandmother was so shaped that her family used to tease that it was quicker to jump over her than go round her. There's a lot of obesity about nowadays and that's a lot of extra weight for flight-planners allocating fuel to optimise the loading of planes. Nobody wants to run out of fuel if there is a slight delay in-flight and the flight-planner has been using a ready-reckoner of passenger weights from the 1950s which says that 100 people weigh 7,000 kg.

Running out of fuel??  That's what happened on 24th August 2001 on Transat Flight 236 [Toronto-Lisboa] in the middle of the Atlantic. Captain Robert Piché, the pilot, demonstrated The Right Stuff when a fuel-line leak drained the last drop of fuel from the engines when he was still 100km from his emergency destination at Lajes Airbase in the Azores. He glided in! taking in a 360 degree turn to shed some height and further slaloming to shed speed and bring the airplane to the runway.  Everyone survived, the most serious injuries occurring in the evacuation. If you can't imagine what it might have been like on board, you can get a flavour from a participant (and check out the comments for other views on the same events). On returning to Toronto Captain Piché said curtly ''I don't consider myself a hero, sir. I could have done without this.'' These pilots: ice-water in their veins. It's in the movies.

The Boy, who through hard graft at Open University made himself an an engineer, is working on the railroad these last several years. In particular his company has had relatively tiny chunks (mere millions!) of the £15 billion which has been allocated to Crossrail - Europe's biggest engineering project driving new railway lines right through London from West to East. I'll do something to bring the propaganda videos to your attention later on this year - it's a HUGE project with some interesting ways-of-thinking. Mais revenons nous a notre fils: for the last year he's been doing a MSc in Railway Systems Engineering and Integration at U.Brum.  Since the book Freakonomics came out, it's been clear that all sorts of human behaviour can be investigated by economists and they can have a ball while doing it. Talking to The Boy, it seems that a similar case can be made for engineers: machinator sum humani nihil a me alienum puto.

He led a group research project in the Masters investigating how trains can cope better with the obesity epidemic.  Because fat people are going to be using mass transport along with the rest of us. One element of the research was discovering what it is like to be overweight on today's trains. Being engineers they made up an Obese Body Enhancer OBE suit with a 117cm circumference and took turns wearing this on trains. Unaccountably this neoprene uber-jumpsuit [R above taking up a seat-and-a-half] had a Union Flag on the front. They designed a staggered seat arrangement [L] that was reasonably efficient seating everyone within the 95th percentile for girth and also successfully accommodated those beyond this limit. I think that's just great; it's silly and counter-productive to use obviously discriminatory blunt instruments like charging large people for two seats - especially as seat assignment is done at the last minute at the airport.  If we can adjust the engineered world to the reality of the people who are out there, travel will be more efficient and ultimately cheaper and more convenient for all users.

The Boy's solution to the seating problems of the Great Travelling Public made me think of the flap last month about hexagonal seating on airplanes. This is a patent taken out by Zodiac Seats France for a novel arrangement of seats for coach-class passengers in the future. The HD31 design [R with mannequins masquerading as sardines Sardina pilchardus]  inter-digitates forward- and rearward-facing seats to give more shoulder room; to do away with shared arm-rests; and pack more passengers in the tube of 3+3-seat, single-aisle, short-hop aeroplanes. The commentary has been filled with words like cram, horrible, personal space, awkward, and no thanks.  But these are just the negative reactions of people who are terrified of The New. Me, I'd give it a go if presented with a choice; especially if allowed to book the rear-facing seat - famously better to occupy if you desire to survive when the plane hits the deck off piste.

Note added in proof: A paper including the "Thinking Big" project has been accepted for the
Fifth International Rail Human Factors Conference in London next Month
Posted by BobTheScientist at 06:30