We were talking at home the other day about The Girl With The Dragon Tattoo the viral detective novel from Sweden. I said I was a little sour graped that a key plot hinge - an old photograph reveals that the baddie had been in town when he said he wasn't - was something I would have incorporated into the novel I never wrote when I was 17 . . .because I hadn't then the stamina I have now to whang stuff down for The Blob. I struggled through TGWTDT and didn't pick up the other two books in the trilogy: the casual misogyny and violence was too much for me - the original Swedish title was Män som hatar kvinnor [Men who hate women] - and I certainly wouldn't have started a book with such a creepy title.

My Old Man died 15 years ago and my sister and I went home the following Spring to sort out his Shed; which was filled with paintings. We sorted them into categories: nautical, landscape, local, foreign and selected a few which had nostalgic or visual appeal.  One of them he had called "A Long Way Home '96" showed a small flock of sheep walking behind their shepherd down a broad-verged lane.  Several years afterwards, The Boy scanned several of his grandfather's works and send e-copy out to the family for interest and 'the record'. 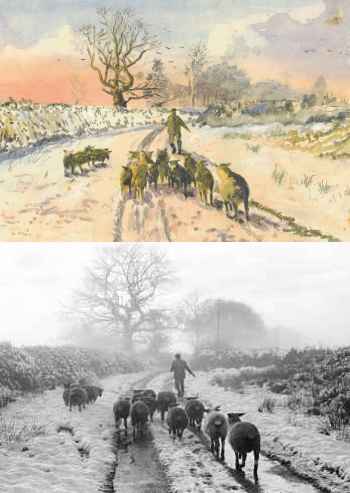 This morning The Boy sent me a link to the B&W photograph below The Da's watercolour. The photographer was James Ravilious and he called it "Irwin Piper taking his sheep for slaughter" which is a little different in sentiment to my father's title; but probably more true to actuality. Ravilious collected an enormous archive of pictures of everyday life in North Devon in the 1980s. I don't think there can be any doubt that my father plagiarised copied was inspired by the photograph, although I haven't the foggiest idea where he would have come across the photograph. When we were young, I think he'd use the painting as an excuse to get out into the fresh air and away from the wrangling mill of children and domestic responsibility.  After he'd retired and his children had left home, his holiday watercolours evolved into a wider variety of genres, media and materials and he started to attend art classes in the local town. Maybe his one of his teachers had presented the photo as a class exercise?
Posted by BobTheScientist at 23:11