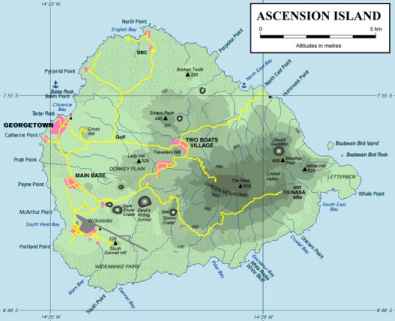 Where are we now then? Back on the Mid Atlantic Ridge further up the spine from Bouvet, Tristan da Cunha and St.Helena but not as far as Cabo Verde and the Azores.  You can't really get more remote unless you go to Easter Island or Pitcairn. The stamp [L] shows the location but totally out of scale.  17 million people live in Lagos, the red dot to the NE, but only 1,500 folks call Ascension home.  St. Helena is the nearest dry land 1300km away and Ascension is a little closer to Africa 1600km than to Brazil 2250km. St.Helena is about 50% bigger in land area 120sq.km vs 80sq.km but has 4x the population and hosts the territorial Capital at Jamestown.  But Ascension has the airport!  If you ever arrive in some impossibly remote Ryanair destination ("Brussels"-Charleroi is almost in another country!), you might by thankful that it's only a hour by shuttle-bus rather than three days at sea to get into town.  Ascension was uninhabited until 1815, when it was garrisoned by the British navy with a watching brief on Napoleon in exile 'next-door' in St. Helena. In 1836, when Charles Darwin and HMS Beagle called in to the islands towards the end of their epic paradigm-shifting voyage round the world, the Helenots joked "We know we live on a rock, but the poor people of Ascension live on a cinder", so he was partly prepared for the bleak, arid, windswept and unwelcoming lava-fields that he encountered . . . and promptly traversed to sample with his geological hammer. The lack of water was so severe that Ascension was victualled like a ship at sea and was, indeed, named HMS Ascension. In much the same way HMS Vernon, in which my father served and I lived for a year in the 1960s, was a naval shore establishment in the middle of Portsmouth. Vernon is now  a shopping centre called Gunwharf Quays.

Darwin was not the man to make observations only and he thought that the water supply might be augmented if the volcanic peaks could have a more or less permanent cloudy crown such as he'd seen on numerous tropical islands in the Pacific. One difference between Ascension and, say, Tahiti was that the latter had a rain-forest. Maybe if you built a forest, rain would come? Darwin was not the first man to voice such an idea but he was remarkably well connected to the scientific-political establishment. When he returned to England he shared this idea and his enthusiasm for it with his pal Joseph Hooker, whose father was director of the botanic garden in Kew.  Hooker made his own 'site-visit' to Ascension in 1843 on his way back from a famous Antarctic exploration and could only identify a single species that passed as a tree.  At the behest of the Admiralty, Hooker undertook to ship a variety to trees, shrubs and understory plants to Ascension to a) encourage aforestation to promote clouds and rainfall b) to stablise steep inclines and slow run-off c) try out a few xerophytes that would tolerate the prevailing salt-arid conditions and finally d) provide some fresh food for the garrison. Everything had to be proof against goats, rats and mice which had been introduced since the island was discovered in 1502. The species sent out were chosen using the best scientific information that could be obtained. Survival was a bit of a lottery: some seeds and saplings got the mildew aboard ship; others were eaten by the goats and some wouldn't have made it anyway for various unfathomable genetic or ecological imperatives.  In all of this, nobody paid the slightest heed to the existence or well-being of the microbial flora surrounding the roots of the imports.

It has been a striking success. 20 years later there were thickets of trees [R] comprising dozens of different species all propping each other up in a part-artificial, part-natural reduced-instruction-set ecosystem. Heck, the highest point on the island is now called Green Mountain. The diversity of the vegetation increased but the endemic species have been hard hit by the invasives and not just the goats. Of the ten native species of ferns known in 1850, three are now extinct. Interestingly, the greening of Ascension seems to be concentrated in the higher regions, down on the flattish volcanic plain the landscape can still look unrelentingly bleak.  The local tourist office, for example boasts the "worst gold course in the World": where the greens are browns. But I think Hookers cunning plan is an improvement. The rapid response, and development of ecological complexity, to man-made terra-forming in Ascension will be used as a test-bed for reclaiming other parts of the planet which have been devastated by natural or human-caused disaster.  But we are really still a long way from having a clue.  For every seemingly positive example, like Ascension or [re-]introducing wolves to Yellowstone, we have a matching disaster like bringing rabbits and cane-toads to Australia or goats+rats+cats pretty much everywhere a sailor has ever set foot.

The Blob's Island Index
Posted by BobTheScientist at 05:57