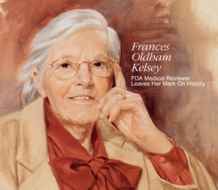 Frances Oldham Kelsey, who blocked the licensing of Thalidomide in the US, died yesterday morning in London, Ontario.  She returned to her native Canada from Washington DC  at the end of last year when she had turned 100 years.  She got her first start in science because Frances could be taken for a boy's name and must have endured the usual assumptions that she was slightly feeble if not feeble-minded because she was a woman. On the contrary, she had the backbone to resist the pressure of Megacorp to licence a new product which was asserted to be harmless without sufficient evidence to support the assertion. Evidence and its correct interpretation is what science is. Her advice to young people starting out: "take a chance sometimes and leap into the unknown". She did the States some service.

40+ more women in science.
Posted by BobTheScientist at 05:46