Bon anniversaire! à Luc Montagnier, the discoverer, with a lot of other people, of Human Immunodeficiency Virus HIV the virus that causes AIDS. Now, if you're white and live in the West, your life expectancy with a load of HIV on board is measured in decades. That's because of the development of at least 20 anti-retroviral therapies which are making money and saving lives. It's a different matter, of course, if you are living in sub-Saharan Africa, where the collapse of your immune system will finish you off rather quickly: because poverty and foul water and poor housing and exotic worms and protozoa and bacteria conspire to a perfect storm of death.

In the very late 1970s healthy young men in the US started to present to their medical practitioners with some really rare, not to say bizarre, illnesses including Pneumocystis carinii pneumonia and Kaposi's sarcoma. The doctors did their best to treat them and scratched their heads as to what might have laid fit young chaps open to such assaults. In 1981, the Center for Disease Control CDC in Atlanta, put out a bulletin describing the condition. That brought to light hundreds of other cases across the country - a worrying epidemic. It's CDC's job to collate reports of disease, so that someone has an overall picture in case there is a pandemic in the making. People at the CDC and elsewhere with a historical frame of mind might have cast back to the 1918 Spanish 'Flu Epidemic which killed millions and seemed to have a preference for the young and the fit.  There was something about both epidemics that made people shake their fists at the heavens at the outrageous unfairness of it.  One current take on the Spanish 'Flu is that it killed the fit because their immune system worked really well - over-reacted really and caused a system wide shut-down in order to control the assault.  The treatment worked but the patient died.

It is really the opposite with AIDS, because it rapidly became clear that in AIDS the immune system was working not-so-good and getting progressively ineffective until something quite ordinary, Candida "thrush" albicans for example, finally killed the patient. Pneumocystis carinii and Staphylococcus aureus are widespread in the environment, including up our noses but a working immune system, including a fully functional flora of 'good' bacteria, keeps them in check. Like William McBride noticing a few kids presenting without arms and connecting that with the fact that their mother's had taken the drug thalidomide, the people at the CDC were putting together a syndrome of symptoms and associations.  Early on they called it GRID - gay-related immune disease - because the dying men often had had sex with other men. That naming didn't stop them wasting away, covered in red lesions and coughing up blood, but it gave the astute a clue about how it [whatever it might be] was transmitted. 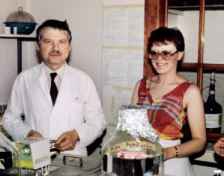 Willy Rozenbaum a doctor in Hôpital Bichat in Paris, who had a number of GRID patients on his wards, was sure it was caused by a virus, perhaps one related to another virus HTLV discovered a few years earlier. HTLV [human T-lymphotropic virus] is what it says on the tin - a virus with an affinity for T-cells which are key players in a functional immune system.  Rozenbaum took a trip across town to the Institut Pasteur where Montagnier [R, L] was the acknowledged expert on retroviruses, including HTLV, which have the strange facility to be able to make DNA from RNA in contravention of the Central Dogma. Montagnier quickly dismissed any close association between a) the cause of GRID which appeared to be screwing T-cells over and making them die and b) HTLV which contrariwise caused T-cells to multiply uncontrollably and present as a leukaemia.  Nevertheless, he was intrigued and said that one of his people would look into it if Rozenbaum would provide a biopsy to work on.  One of his people turned out to be Françoise Barré-Sinoussi [R, R] a post-doctoral researcher then in her mid 30s.

With a hypothesis, an effective and the wherewithal to test it, the answer came back really quickly. Barré-Sinoussi had developed a test for the presence of reverse-transcriptase, the enzyme that makes DNA from an RNA template. What she noticed was that as T-cells died in the Hôpital Bichat biopsy material [they had a test for cell-death too] there was a little burst of reverse-transcriptase activity and this association was predictable and reproducible. This evidence looked like a retrovirus, quacked like a retrovirus, so they called it lymphadenopathy-associated virus (LAV) and rushed their findings into print. At one point they were concerned that their sample would run out of suitable cells for their monster to consume; but a quick trip across the road to the blood-bank kept the experiment going. Despite the title of this key 1983 paper in medical history "Isolation of a T-lymphotropic retrovirus from a patient at risk for acquired immune deficiency syndrome (AIDS)" they were appropriately cautious not to spell out that LAV caused AIDS.

Meanwhile across the pond, Robert Gallo, the doyen of American retroviral work, was hot on the same trail. Gallo's team had discovered a molecule, IL2, which allowed them to culture T-cells in the lab rather than feeding their viral samples with fresh blood.  In addition they had identified HTLVs which caused leukemia and Gallo had won the 1982 Lasker Prize for this work.  Americans regard, with good statistical evidence, a Lasker as a prelude to a Nobel. In 1984, Gallo published a clatter of papers in Science, putting out his stall for HTLV-III being the cause of AIDS. It transpired that LAV and HTLV-III were the same thing and what we now call HIV.  It also turned out that HTLV-III was rather too identical to LAV!  The way RNA retroviruses reproduce is inherently inaccurate and so they evolve really fast. The probability of two independent samples from unrelated gay men on different sides of the Atlantic being so similar was vanishingly small and it looked like a bit of industrial espionage might have crossed the line from rivalry to fraud.  A forensic study of archived samples in the two laboratories showed that the Americans had gotten their virus from Paris rather than vice versa and the French called 'foul' and took the high moral ground. Gallo is Italian for rooster hence the fowl/foul pun in the title.

Why did it matter? Because the Americans had been quick to develop their findings into a golden goose and had taken out a patent for a reliable test for the presence of HIV in people who presented with Kaposi's sarcoma. One of the grounds for challenging a patent is the concept of prior art: if key knowledge is out there already, the applicants for patent can't claim they have invented something unique. Surely Barré-Sinoussi's 1983 paper constituted such a challenge?  But nobody wanted to fight that line too hard because it would kill the patent and allow everyone - Ivoiriens, Tanzanians, Mozambiquies - to develop their own test and not pay royalties to Gallo's employers. It was a huge, ugly and very public argument that spattered the ivory tower of science with mud. It took an intervention by the Presidents of the two countries François Mitterrand and Ronald Reagan to iron out the ruckus and agree that the income stream would be divided 50:50. Eventually further meticulous investigations cleared Gallo of misconduct and he and Montagnier published a joint 2003 paper in the NEJM New England Journal of Medicine "The Discovery of HIV as the Cause of AIDS". But it is as easy to recall the sped arrow as the flung mud of moral indignation and Gallo's rep was irretrievably tarnished.

In 2008, the Nobel Prize of Physiology and Medicine was awarded to Montagnier, Barré-Sinoussi and . . . Harald zur Hausen (!) a German virologist who had done nifty work on human papilloma virus which causes cervical cancer. Montagnier acknowledged that this was a bit unfair as he knew that Gallo's contribution to the discovery of HIV and working out how it nobbled T-cells had been enormous. But the committee-men of the Nobel Prize knew better because their sense of moral certainty was yet more enormous.

Still and all, it's Luc Montagnier's day today. 83 candles to blow out. Félicitations from all the people who are not dying of AIDS.
Posted by BobTheScientist at 07:07