When Dau.II came home for the weekend a month ago, she b(r)ought her father a late birthday present. One of the unintended consequences of my children going to college in the University of Life rather than Heidelberg or Harvard is that they now have disposable income sufficient to buy the old man a new book if they feel like it. I got The Economist's annual compendium The Pocket World in Figures 2015.  You can get it for $10.  Or you can download it as a wow-your-pals app.  After a while reading out odd nuggets of information [Rwanda has by far the largest proportion, 64%, of women in parliament: neither Ireland nor Ukraine make the top 20], we set off on a scurry round the house to find the 2008 edition that I bought for 20c about 5 years ago.  Some things don't change: Russia is still the largest country, Sahara is still the largest desert and Baikal is still the 7th most extensive lake.  By comparing the absolute and relative size of things in 2008 and 2015, economists and statisticians can make predictions about how things will pan out in 2023 or 2030.  Will Ireland really have the fattest citizens in Europe at that time?  These things are important because they should inform governments in their planning for the future.  The Health Service is going to require more and sturdier beds in the future as a tide of obese adults wash up in hospitals and dialysis clinics with diabetes, cancer, hypertension and depression.

Famously, the Economist publishes each year it's Big Mac Index to get a handle on the relative purchasing power and exchange rates in various countries round the world.  A BigMac costs $2.27 in Ukraine but $7.15 in Venezuela in 2015. In 2008 Venezuela, under the radical leftist Hugo Chávez, was at the other end of the spectrum with its BigMac then costing $1.58 [Ukraine $1.71].  The Venezuelan government is, even at this moment, dealing with food scarcity - it's not only hamburgers where supply is outstripped by demand - buy requiring farmers to sell their produce to the state. The Reactograph offers some data to show how Venezuela is an economic basket-case.

The Pocket World in Figures offers an easy option for lazy journalists to fill their quota of copy-inches without having to do any research themselves. The Reactograph, for example, abstracted 100 interesting facts from the 2010 edition.

100 years ago, according top my Chambers's Concise Gazetteer of the World (1914) the three largest metropolitan areas in the World were London (4.5 million), New York (4.7 million) and Paris (2.9 million).  The total population of the world was 1.65 billion.  There are now 7.* billion people on the planet and those great cities of the past have slipped to 6th (NYC), 25th (Paris) and 36th (London) places. London is now the same size as Lahore which in 1911 housed only 225,000 people.  In 2008, the most populous places were Tokyo, Mexico City and New York but the latter two have been, or will be, bumped by Delhi, Shanghai and Mumbai between 2005 and 2020.  Watch out for places like São Paulo, Dhaka and Lagos: that's where the birth and immigration is really happening. São Paulo is in the hills but the other two are worrying candidates for inundation by sea-level rise. 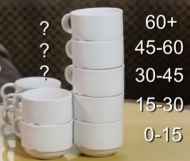 We'll change track a little bit.  Every year since 1951, an organising committee in Lindau, (an island in Lake Constance where Germany, Switzerland and Austria meet) invite a minibus full of Nobel prizewinners and a couple of plane-loads of hot-shot young scientists to a meeting-of-minds. Last year, they asked Hans Rosling to talk about aging and he started his talk by asking the assembled brilliant minds to estimate what is the current life expectancy at birth . . . for the world.  The correct answer - 70 years - polled the fewest votes.  It turns out that life expectancy at birth in Bangladesh - wet, desperately poor and besieged by Arsenic - is close to the Wold average and that's 70.  After his talk he was interviewed by Nature and showed the age structure of the world's population as 1 teacup = 1 billion people.  The key part of the movie is between 4'20" and 7'20", you can forget about the contributions of the others - their opinions are worth no more than yours or mine.  But Rosling has data which is counter-intuitive and that's useful. He points out that the missing 3 billion [marked ? ? ? in the picture] didn't die, they just weren't born; the two tea-cups on the left were born because women in the third world tried for a baby because prospects for food were better. I've roundly blamed Norman "Green Revolution" Borlaug and the dreadful Fritz "Fertilizer" Haber for the excess burden these billions are putting on the planet.  We've certainly greatly reduced childhood mortality, largely with vaccination and clean water, and so the bulge at the bottom is going to work its way up as the top-cups age and die and are replaced by the rising young.  It will take about 50 years and we'll then have 10 billion people to feed.  Turns out that Ukraine and Russia both have life-expectancy lower than Bangladesh: that's really surprising and a little worrying for my readership statistics.
Posted by BobTheScientist at 07:43