Back in April I was squeezing a lot of meaning out of two hormones, vasopressin and oxytocin, which are involved in a disconcerting number of more-or-less related functions . . . often to do with various forms of involuntary/smooth-muscle contraction.  It's a wonderful example of evolutionary bricolage [tinkering]: if you have a molecular system set up and carefully calibrated, it's easier to tweak and re-purpose the existing machine than create a new system from scratch. When I was a student, I sawed up a tea-chest and made an exceedingly uncomfortable arm-chair and then rescued a door floating on the shoreline to make an unmatching table for the back yard - that's bricolage.  The oddest thing about the interaction between oxytocin and the nervous system is the leap from mediating the bonding between mother and child to controlling the bonding between potential mates.  When you look deep into her eyes you're triggering a feedback loop involving the posterior pituitary which pumps out oxytocin to induce you to do more googly eyes. 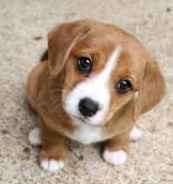 A group from Azabu University in Japan have some evidence, published in Science, that the generalisation of gaze + oxytocin + bonding connection extends from mother & child to bloke & bird . . . to humans and dogs. [Lay summary; paper: both behind the Science paywall]  It is a fact know to all dog owners that their mutts are more loyal, more honest, better company and cheaper to feed than any human partner.  The Azabu U team have measured the concentration of urinary oxytocin before and after a bonding session between owner and hound. They have also administered extra oxytocin to the dogs to see how this affected the behaviour and oxytocin levels of their human companion.  As a further control they have done similar parallel experiments on owners and wolves raised from puppy.  Wolves don't get it! They can't follow human eye direction to solve problems or act helpful. Also their oxytocin levels don't change when their owners gaze lovingly at them and they don't gaze back. As a pet, they are about as responsive as a boa constrictor and require a lot more feeding.  So the working domestication hypothesis is that in the process of evolving from a top carnivore and competitor to a valued member of the human pack, the oxytocin/gazing pathway has evolved to mimic and hijack the human feedback loop. That could be neat.

It's the sort of paper that gets privileged at the editorial board meetings that happen every week in Nature and Science. Publishing papers that are going to shift ground in one or another field of science is the top priority at these premier general science journals.  But the journals also have to have some material that will be readable by everyone. So sexy papers whose impact is obvious to all thinking people and which can be summarised in a press release that will be picked up by The Times (of London, of India, NYT) are less likely to finish up on the cutting-room floor. The press releaase was indeed picked up everywhere: BBC; IFLS; HuffPo; NatGeog etc. But sometimes the desire to publish 'sexy' induces a collective madness in the editorial board and they push out something all-levels bonkers like idea that arsenic replaces phosphorous in the backbone of DNA of certain bacteria.  I think this puppy-dog tale may be a case in point.  Not least because the substance of the paper [it's the oxytocin-gaze loop, stupid] was published years ago in Hormones and Behaviour by the same group.

A couple of things give me paws pause. They seem to have taken two urine samples from everyone within 30 minutes (before and after gazing-session).  Now, with my advancing years, I am getting increasingly "france" [in continent - geddit? hahahaha] but I'd find it difficult to raise two urine samples in 30 minutes unless I was given a really strong cup of tea. So maybe the before and after samples differ because the latter are a bit of a squeeze?  The other thing is that only female dogs respond significantly to the extra oxytocin.  Toss in a dollop of  skepticism because of the small under-powered sample size (30 owner-pet pairs) and you may have a finding that cannot be reliably repeated. €5 says another study will pour cold water on it within the year, like the see-saw of significance for the association between prostate cancer and vasectomy.
Posted by BobTheScientist at 06:51