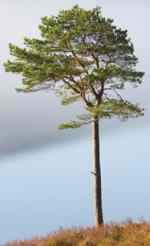 We stayed a few days on Sherkin Island with our vet a couple of years ago. It's a ferry-trip from civilisation if you count Baltimore, Co Cork, as civilised [it has a post-office]. The extraordinary and eccentric Sherkin Marine Station publishes Sherkin Comment a tabloid newspaper about the natural world, originally quarterly, now it seems whenever they get a grant to defray the printing costs. They must be in funds because a stack of the 2018 edition appeared at the library in Tramore last week. There was an article addressing a burning question of ecology and conservation: Is Scots' Pine Pinus sylvestris [fine example R] native to Ireland? Getting a seal of approval for being native requires quite a bit of definition. Is a tree which came in behind the retreating ice-sheets 12,000 years ago a blow-in?  Many people take 500 years ago as the cut-off.
Gospel Inventory According the the Tree Council of Ireland:
Ogham - Ingles - Irish - Latin
There is an argument that IF the tree has a representation in Ogham THEN it is native because Ogham pre-dates the threshold for 'Native'. The native Irish seem to have been pretty good taxonomists; having separate names for the two species of oak [Quercus] and birch [Betula a distinction vital to the proper function of saunas]. The Irish for hornbeam at the bottom of the list - sleamhean -  means slippery; or shifty when applied to people. Slippery might better be applied to Betula pendula the supposed soapy [saponins!] component of sauna whisks.

Other people are more widely inclusive to tally up 33 species which are native or probably native. Part of the dilemma about Scots' is that pollen analysis = palynology says that the species was here early but seems to have died out around 4,000 years ago. It must have been some epidemic like Dutch Elm Disease or Ash Die-Back because the extinction was replicated across much of NE Europe. The tree was re-introduced from Scotland [hence the name?] with the plantations of the 1600s. Recent evidence from Fraser Mitchell, and his Effective Alwynne McGeever in TCD Botany Dept indicates that there was a refugium in Co Clare where Pinus sylvestris pollen has been found in sediment cores all the way back to the first post-glacial recolonisation. That's all very well but it will require DNA analysis to determine if any 'original' genetic stock is left in the genepool today or if the whole island has been swamped by the McInblows.
Posted by BobTheScientist at 07:52