"When I use a word," Humpty Dumpty said, in rather a scornful tone, "it means just what I choose it to mean—neither more nor less."  Nunavut.
Here we go: some compulsory homework rather than a neat 700 word exegesis Blob identifying a problem, sorting it out, tying it up with a pink ribbon and delivering it with your breakfast tea-and-toast. Sorry but it's interesting but a bit more than 700 words worth, so in this case it's worth scanning the original article and the MeFi commentary: "all the wrong answers are interesting".  Twain alert:

"It ain't what you don't know that gets you into trouble.
It's what you know for sure that just ain't so"
What do you actually know about the lads with kayaks and igloos?
A couple of quotes from the article: 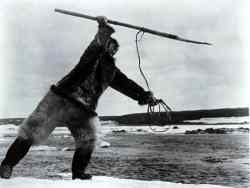 "All these changes brought with them new English words that describe the new objects and their function. The changes also triggered a shift in the use of language." If you want to maintain a sense of cultural identity you have to make sure that you don't inherit the word for a new-thing along with the new-thing itself. French and Irish are fighting a rear-guard action trying to use ordinateur or ríomhaire instead of computer. Actually of course the language doesn't fight, l'Académie française and Coiste na Gaeilge, na Gaeltachta agus na nOileán fight on the language's behalf. When I needed to print new letterhead for INCBI in 1993 I applied to CnGnGanO for how to translate the neologism bioinformatics [a word defo not used by Douglas Hyde, or St Patrick]: they returned bithaisnéisíochta but had a debate about it, with a transliteration bioinformatici being considered.

“Eskimos Have Fifty Words for Snow” is an amazing phrase, because every word in it is wrong. But reversing it—announcing proudly that they don’t—only replicates that wrongness; you can’t say no to a bad question and be right. In other words, it is a have you stopped beating your wife? question. You cannot safely even address the question because it is framed as a condemnation; to maintain your innocence of assault-and-battery you have to challenge the very question. For the fifty words issue you need to redefine or at least deep-think "eskimo" "fifty" "word" and "snow" [you're safe with have and for]. The question of whether the words you have to use when speaking a given langauge affect your ability to think independently was briefly Blobbed in my piece about Lera Boroditsky six months ago.


Another take on Inuit-Snow
Posted by BobTheScientist at 07:16