The myth of exceptionalism 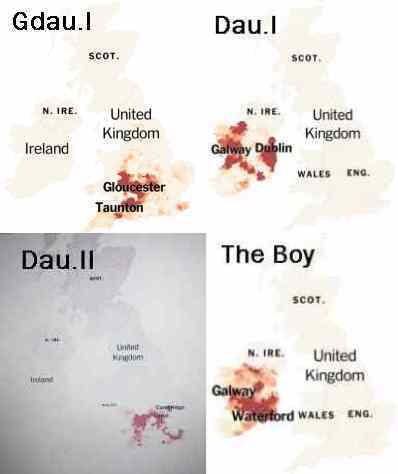 I had a most interesting MI weekend propagating Joshua Katz's NYT quiz on the language used in These Islands and reflecting on the results. The "QI" Brother came back with a map-of-usage very similar to mine - no surprises there because we were at school together . . . and born in Dover. With the Wexford Science Café scheduled [not skheduled!] for Tuesday 19th Feb, I ordered the WSC troops to do the test on themselves and those about them and report aTuesda'.
And it was so, the most surprising finding was that Dau.II, despite being born in the same farmhouse and raised on the same remote farmlet as her older sister, talks the very best, slightly strangled, Home Counties middle-class southern like Father Bob. That older sister, who spent 5 of her young adult years living in England [Stroud, Gloucs], but should be otherwise identical, spiks, in fact, broad Irish like her Brother [and her Mother, data not shown]. The Boy's daughter Gdau.I otoh, was born seven year ago in Bath. Despite her father's Irish creds and her mother's in Manchester Cambridge Bristol, the youngster has picked up a strong streak of West-Country Wurzle.

At Wex Sci Caf, we came up with few surprises: two of our number raised in the UK had maps broadly similar to mine and Dau.II's [above bot left], the rest painted a broad swathe of red across the Southern half of Ireland despite a good bit of hopping about within those bounds and stints abroad. One thing we agreed on was that your identity is identified by the first [above the fold] 25 questions on the Katz NYT quiz. That's an interesting reflection on sampling, sample size and minimising effort for return. When MORI carry out a political poll to gauge public sentiment on Brexit or Fine Gael, they equip a team with clipboards and sent them to several areas of Ireland and ask their questions of 1000+handful of normal-looking random people. They don't ask 2000+handful of people because that would cost twice as much but wouldn't substantially increase the precision. Pollsters reckon that 1000+ gives an estimate ± 2-3% error. Obviously the 25 Qs in the quiz are words chosen because of their discriminatory power but the implication is that analyzing the usage of a few hundred informally written words [letters home, blogs, tweets] will identify the origin and upbringing of the writer to the nearest whole county. Like me at the compiler of Times Jumbo Crosswords. Outlying points like my usage of the word wean for infant is smoked out as an absurd adult-acquired affectation rather than evidence of a Scottish grandmother [which I have].

In some cases a single word will do. Scheveningen will discriminate genuine Hollanders from invading Germans very nicely. Schild also. . Thesche say-it-right tests are known as shibboleths from a typically bloody anecdote from the Old Testament, Judges XII:
5 And the Gileadites took the passages of Jordan before the Ephraimites: and it was so, that when those Ephraimites which were escaped said, Let me go over; that the men of Gilead said unto him, Art thou an Ephraimite? If he said, Nay;
6 Then said they unto him, Say now Shibboleth: and he said Sibboleth: for he could not frame to pronounce it right. Then they took him, and slew him at the passages of Jordan: and there fell at that time of the Ephraimites forty and two thousand.
Nice! Remind me not to stop and shay hello to those men of Gilead. 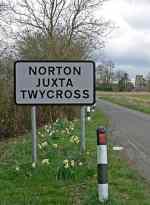 What's this-all to do with Exceptionalism? Well only the fact that Brexit and the dismemberment of the EUropean Dream is hanging on personal identity "we are special in the eyes of god" politics. The Irish government, backed by Big Brother Brussels is insisting on an open border between Dundalk and Newry; Pettigo and Tullyhommon; Strabane and Lifford; Kiltyclogher and Cashelnadrea. The Ulster Protestants are insisting that they must be treated in every detail as equivalent to, and embedded, in the United Kingdom. Newlyn next to Newry; Turnham Green next to Tullyhommon; Strabane next to Stratford; Canterbury next to Cashenandra. . . like Norton-juxta-Twycross in Leicestershire. Certain strains of the political divide are holding up The Troubles as an armageddon in the gestation. But the Troubles are a fading memory even for those who lived through them as adults: I turned 18 the June after things kicked off on Bloody "Derry 1972" Sunday. I know that the average Brit, whatever side they voted in the Brexit referendum, has not the slightest interest or understanding of Irish exceptionalism on their border. They are mostly unaware of  the fact that [part of] Ireland left the UK before WWII; are bemused about the difference between the Catholic and Protestant versions of Christianity [it's the transubstantiation, fellers]; couldn't point to either Derry or Dublin on a map [like me with cities in China] and when they think about the Irish at all it is to say "a plague on both your houses". My brother was 20 minutes too early for a bomb in London's Oxford Street in the 70s: near-misses like that and actual victims known personally to Brits added a further level of disdain for The Other Island. It is tribute to British tolerance (mixed with disdain) that there were no pogroms, or street-spittings aimed at Irish people on the mainland during the Troubles.

more Blobbiness on linguistic maps
Posted by BobTheScientist at 07:45