[Try again: published by stutter yesterday]
When I left home in 1973 to go to college in a different country, I was too late to secure a room in the Halls of Residence and was assigned to digs in Sandymount. It wasn't really a home-from-home because my landlady had very (to me) peculiar ideas about what was appropriate. The arrangement was B&B for Mon-Fri and 3 meals on the weekends. I don't remember much about lunch during the working week, but I found the Evening Meal a very unsatisfactory chore. I guess I had other things on my menu but I remember dining chiefly, almost alternately, on a) a packet of Chocolate Goldgrain biscuits and b) fried whiting & chips. As I say, most unsatisfying. The Beloved was barracked in a hostel run by the Loretto Sisters, where she got two meals a day and shared a dormitory with 5 (five!) other young women. We hatched a plan to buy some food in Moore Street market and take it out to visit my pal Robert, a geologist who had a room in the TCD Halls of Residence. Robert said he'd be delighted to have visitors and nobody would care or notice if we used the kitchenette at the end of his corridor. And it was so: we went and bought half a red cabbage, a couple of pounds of potatoes and some other food and took the bus out to the Dartry Halls where we cooked them up a storm. It was the best meal I had that month. 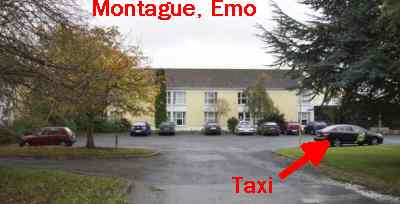 This all came rushing back to me because of a passing remark by Rosey Kunene last Friday lunchtime. Rosey Who? Rosey Kunene; she a young woman from Malawi who came to Ireland as a refugee several years ago. She has been sharing a room in a Direct Provision centre [like above, the old Montague Hotel on the old N7 (now the R445) near Emo, County Laois], on the far side of the river from The Institute. She came to talk about the daily grind of a Displaced Person in Direct Provision DP/DP in BallyBoondocks to a cohort of Media and Publicity students at The Institute. At very short notice the rest of our community were invited to come listen. I've written about Direct Provision before: it is an Irish solution to the International problem and it is quite easy to get cross about its existence.

DP is run by the newspeak Reception and Integration Agency RIA and seems to be premised on this logic: IF someone has been so brutalised and dispossessed that they up-stakes and leave their country of birth THEN they will be grateful for "the basic needs of food and shelter". I'm sure this is true for short while. When I volunteered to meet plane-loads of Ugandan Asians as they de-planed at Stansted Airport in the Summer of 1972, they really appreciated the tea, hot & strong, and biscuits that we were doling out. It was also a relief that they were getting tea and finding their traps in a hanger and not in a dark, damp and muddy field. Within a short time, the whole displaced community, all 27,000 of them, had been absorbed and integrated into British society - mostly in existing Asian ghettos in Leicester and Bradford.

The problem with DP is that it meets only basic needs goes on and on and on, as the refugees wait for their next hearing, their next appeal against an adverse ruling, or for the RIA to find the papers which have been lost. Meanwhile, the agency and self-esteem of the refugees go down the toilet. As well as 4,000+ adults, here are 1,600 children in DP this week, 55% of whom have been in DP limbo for longer than 5 years. The RIA provide all meals, heat, light, laundry, tv, household maintenance and an allowance of €21.60 a week.  Aaaaaaaaaargh! What kind of a bean counter gives an adult an extra €1.60 a week?  The sort of bean counter who knows that bumping the allowance up to a folding-money €25.00 would cost the state [6000 * 52 * €3.40] €1million. Did you know that up until your first hearing you can work outside the DP Centre where you are billeted? But that after you have been refuse 'leave to stay' you can't?  Years go by when you can do nothing but wait for the chop.

Someone, for sure advised by a dietician, cooks 3 meals a day - rice potatoes rice potatoes - which you and your children can eat . . . or leave.  If there are a lot of Africans in a given DP centre some thought is given to provide 'African Food'. WTF - Africa is a continent. Imagine the boot being on the other foot and a clatter of white folks fleeing for their lives to China. The Chinese dietician googles up "European Food" and serves Wexford rissoles with borsch and cannelloni  - mmmm good but ooooo weird.  Rosey Kunene explained that the greatest coup you can achieve as a DP is to make a friend outside the DP who'll invite you home to use their kitchen.  Butttttt! rather too often that friend outside is a Polish or Irish fellow who is nice enough but quite happy to exploit the yearning for affection and human contact but less happy to acknowledge any children that might result. 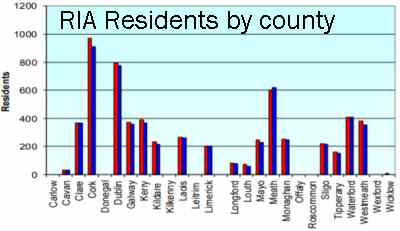 How does that differ from the same data six months earlier? 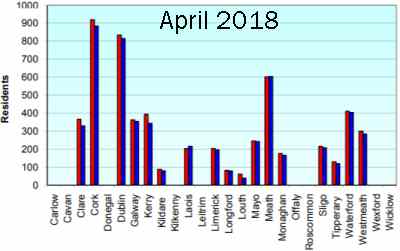 It's like those find ten differences puzzles in the children's pages of the newspaper.
Answer: They've opened a new Emergency Accommodation Centre [capacity 30] in Cavan. AND they have conjured a 27th county, as yet unnamed, between Limerick and Longford. What's the point of having an Effective in the RIA compiling statistics which never change? I'm too depressed to continue . . .