Blink and ya miss it, b'ys. 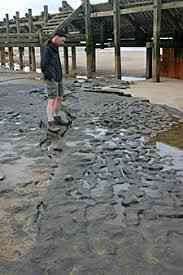 There is an archaeologically important site on the very edge of England in the village of Happisburgh. It came to prominence in 2010 when researchers found a bunch of flint flakes and a mammoth (Mammuthus meridionalis) tooth buried in sediments that were about 840,000 years old. The flakes were clearly made by flint-knappers and no dog or dolphins has ever mastered those skills; so these artifacts were evidence of human habitation much early than previously documented for NW Europe. As with the Piltdown Man discovered almost exactly 100 years previously there was a frisson of jingoism in the reportage - Brits First, those foreign-johnny hominids nowhere. Puffing Piltdown in an excess of patriotism looked rather foolish when the fossil was outed as an elaborate fraud/prank 40 years after its discovery. In May 2013, further coastal erosion and a storm exposed a jumble of trace-fossil footprints which were carefully recorded in a series of photographs by a team from London. They were there because the earlier archaeological investigations had primed people to expect them. The flint knappers must, after all, have walked along this coast. It is just as well that the site was small enough to capture on film in a few hectic days because the next storm lifted the foot-dinted sediments and swept them to fragments in the back-wash. The 3-D imaging was carried out by Isabelle de Groote of Liverpool John Moores U.

The best estimate of the age is based on the geological principle of stratigraphy: older sediments are covered by younger ones. Fossils in these over-lying layers put a limit on how recent the foot-prints and the flint-shavings can be. It turns out that a conveniently timed magnetic reversal also helps nail down the dates. Magnetic reversals = where the N and S poles flip over in a very short space of geological time. These events happen frequently if you scale time in millions of years and helped Marie Tharp make sense of the development of the Mid-Atlantic Ridge. Some people are suggesting that the North Magnetic Pole is getting a bit zippier than the normal stately 50km annual drift and that this presages a magnetic flip.

840,000 years is of the same order of magnitude as Raquel Welch fishing and John Richardson wrastling with dinosaurs in the film 1 million years BC. Much much older in time are the fossils that Mary Anning found on the beach at Lyme Regis.

As to footprints in the mud, I've been there before: with thieves in Crete - with Mary Leakey in Laetoli - with Lucy in Ethiopia.


Posted by BobTheScientist at 07:12