When he was young, my late lamented pal Pepe Malpica managed the family farm in Extremadura while holding down a full-time job in Madrid. Every Friday evening he'd leave work, pick up his wife and two small boys and drive 250km SE to Cáceres. Late on Sunday evening, having put in 30 hours of solid work, the family would drive back to Madrid and sleep the sleep of virtuous work. When he came to TCD, on a well-earned sabbatical year in 1992, he compared his hard-chaw farming with farming in Ireland "The fields are green year round; the rains come reliably and rarely too much; all Irish farmers need do is turn the cattle out in the morning and call them back in, several kilos heavier, in the evening." The criticism was offered with an ironic twinkle that turned away indignation but there was a dig there as well. All things are relative and I don't imagine that Pepe would consider Extremaduran farming a doddle compared to hard scrabble subsistence farming in the Sahel trying to raise enough millet Pennisetum glaucum or sorghum/milo Sorghum bicolor to keep the kids from starvation. 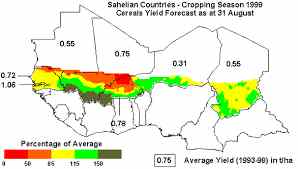 So much to contend with in Sub-Saharan Africa which are irrelevant in Europe: locusts, sand-storms, army-worms; and above all, drought. In the largely artificial capital intensive agricultural systems of The West, monocultures covering prairie-sized fields are not only possible but economically desirable. No farmer in the US Midwest, who can spell the word, believes that the relentless pounding of the soil with corn and soya is sustainable. It is only possible with a) cheap oil to drive the mighty tractors, b) Monsanto to kill everything that impacts on yield and c) depletion of the Ogallala aquifer until it squeaks.

It has long been recognised that intercropping food crops with other species can yield paradoxical benefits. The economic success of pre-Columbian MesoAmerican empires came from the mutually supportive Three Sisters triad of corn, squash and beans. Beans fix atmospheric nitrogen, so all the players can make proteins; the corn provides the bean-pole; while the squash provides water-conserving and weed-suppressing ground-cover. The fact that all three sisters provide something worth eating is almost a by-product: succotash, corn-pone, calabacitas con elote, all mmmmm good.

In the Sahel, the growth limiting factor is almost always water; even in the "old" soils of Africa, lack of minerals, nitrogen and phosphorus is not the deal-breaker. It has been recognised since the 1930s that some plants, like catclaw Acacia gregii and sagebrush Artemesia tridentata are valuable for hydraulic lift. In simple terms, these perennial shrubs can develop a root-system that can tap into deep water . . . and redistribute it where annual crops like millet and milo can use it. They're a bit vague about how this works but the transfer appears to take place underground which implies that the roots of different species are talking to each other.

Nate Bogie is a BSc+PhD Effective working Teamrat Ghezzehei's Soil Physics lab in UC Merced, California. They have zeroed in on a native West African shrub Guiera senegalensis which is tolerated in fields of millet and groundnut Arachis hypogea at least in Senegal where their experiments were carried out. The picture above says it all. The scrawny pathetic plot on the left is millet monoculture; the lushness on the right is millet with added Guiera. The final count was that added shrub multiplied the millet biomass by 10x to about 2 tonnes per hectare and the seed bearing capacity was increased seven-fold. Read the details of their research trying to tease how it works. For me, for now, the bottom line is that the association works . . . wonders.
Posted by BobTheScientist at 07:12