Wednesday I was down visiting Pat the Salt on the Waterford coast. I had an hour before I had to pick him up from town, and as Garrarus Strand is only 5 minutes from Tramore; as the tide was rising; and as a storm was raising whitecaps I though I had time to stride manfully along the beach and get some fresh salt wind in what's left of me hair. At the far end of the strand I saw a spot of pale green. As I trotted along it got bigger and bigger until it manifest as an inflatable buoy 60cm tall and 40cm in diameter. I was delighted. On the way back along the tide-line I picked up another smaller buoy as well. 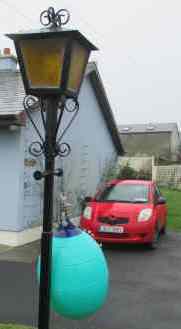 Because I know you care, I've taken a picture with my Yaris for scale. I do my best to repatriate these things [prev] because they are worth money to the owner and I'm trying to declutter.  So here's what was written on the end:
598-5755 E CH.80 / Allison Rianne / Dave Fraser / 1749.
I had a bit of a googlefish and landed an Excel file Vessel & Permit Listing - Greater Atlantic Regional Fisheries Office. Which said that Allison Rianne is a 42 ft [13m] fishing boat; Dave Fraser is the skipper; and they are both berthed in Harrington, Maine. That's 4400 km up the Gulf Stream, so I cannot return this one as easily as sending a few txts and popping over to Dunmore. I could call Dave because I've found his area code but that might be too weirdly disconcerting for him.

Accordingly I helpfully e-mailed the The Harrington Town Office which houses the Town Clerk, Tax Collector, Treasurer, Registrar of Voters, General Assistance Administrator, Administrative Assistant to the Selectmen, Bureau of Motor Vehicles Agent, and Inland Fisheries and Wildlife Agent. If this sounds like Parks & Recreation [Nick Offermann prev] it may be because Harrington is home to only 1000 people, so there are almost as many functionaries inside the Town Office as citizens on the outside. "Stormy weather on the Waterford Coast in Ireland! I've just picked up a buoy belonging to the Allison Rianne, skipper Dave Fraser, (821 Marshfield Rd, Harrington) from Garrarus Strand just West of Tramore. I do my best to return flotsam to its owner. But this one a little awkward to return because the Gulf Stream is relentlessly one way. Perhaps you could tell Dave, though, so he isn't fruitlessly scouring the waves for his buoy. I attach a photo with my Toyota for scale. Either it's a helluva big buoy or we have really tiny cars in Europe - both might be true." If I hear from Maine, I'll let you know.