One of the iconic images of the early 20th century are fields of corn [that would be wheat Triticum aestivum not maize Zea mays] brightly studded with nodding poppies Papaver rhoeas. This lovely weed is sometimes called the corn poppy or the Flanders poppy to differentiate it from the opium ditto Papaver somniferum. And not just poppies:  cornflower Centaurea cyanus; corn marigold Chrysanthemum segetum. The corn chamomile Anthemis arvensis and the corncockle Agrostemma githago once common are now all but extinct in Ireland - done to death by 2,4-dichlorophenoxyacetic acid aka 2,4-D [branded Trimec]. 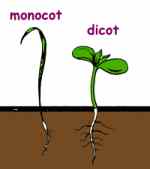 2,4D is a selective 'weed' killer, a product of fundamental research into plant physiology that yielded a crucial insight into the difference between monocots and dicots. These are the two major divisions of flowering plants: monocots have a single leaf in the seed curled up ready for launch; whereas dicots have a pair of seed-leaves (think split-peas or your memory of growing mustard-and-cress on blotting paper as a kid). That's only the naming difference: they have many other aspects of their growth and develop that are not the same. Monocots grow from the base of the leaves pushing the old cells up in front of the still dividing cells at the bottom. That's why we have lawns: trimming off the leading edge with a scythe doesn't affect the meristem (growing point). Dicots otoh grow from the leading edge. As in ourselves, the growth, development and branching pattern of each species of plants is controlled by hormones which are switched on and off at different times and places and >!kaCHING!< you get oak leaves or holly leaves. All the cereal crops - wheat, barley, oats, rye, maize - are monocots; almost all of their competing 'weeds' are dicots. 2,4D acts like a growth hormone called auxin; when sprayed on the leaves of dicots, cells start to divide in peculiar places and the plant twists itself inside-out coping with the blizzard of hormone.  The  sown crop, being a monocot, doesn't respond in this self destructive way and all the water and nutrients in the soil are available to boost yield and profit. I call that clever in the immediate time-scale.

But . . . reducing the plant biodiversity will inevitably impact on the microbial life of the soil: microbes that 'fix' nitrogen, solubilise phosphates, sequester heavy metals, leech their own plant growth promoting PGP factors. Because we know bugger-all about the microbial life of any soil, let alone the particular soil in the Keogh's Springhill Field, it is impossible to quantify the adverse effects of a Kill All Dicots policy. I think I'm convinced that the soils have not been depleted of essential nutrients since the invention of 2,4D and other agri-chemical inputs that tip nature's scales in favour of yield.  But the fact that corn chamomile and corncockle have been heedlessly nixed forever on this island, suggests that other key species in the living web (about which we know so little) are dropping off their ecological niches like leaves in an autumn storm. Lost before we even got properly introduced.
Posted by BobTheScientist at 07:30