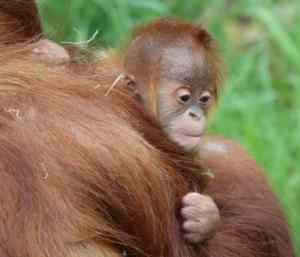 In case you wanted more Zoo Breeding [yest] here is a funny-ironic story about sex among endangered species comes from Basel Zoo's Orangutans [Pongo abelii]. The total population of this species is down more than 50% in the last 100 years. There has been huge habitat destruction [for palm-oil plantations and Japanese hardwood furniture] in Borneo and Sumatra and poaching - not to mention the market for captive apes for zoos - but there are still more than 60,000 out in the wild.  Conservation efforts have been complicated by the fact that there are three species of Orangutans each with sufficient genetical, behavioural and cultural identity to justify saving all three. Pongo abelii on Sumatra Pongo pygmaeus on Borneo and another far rarer variant Pongo tapanuliensis living in a separate part of N. Sumatra. Deciding on what is a species and what is a mere variant or sub-species is not a black & white problem. The ultimate test should be whether a male and a female from two groups can produce fertile offspring. But that's a long haul - maybe 30 years for Pongo - and there is some urgency in the matter: in 30 years all the wild orangutans may be dead.  So conservation biologists tend to take a tissue sample (saliva or blood easiest, turd is enough IF you can get access) and sequence [some portion of] the DNA. The % identity acts as a surrogate marker for actual co-fertility.

If we believe that each species is a unique assemblage of traits (genes, behaviours, microbial hitch-hikers) then we can freeze dry some sperm and egg and send them off to a long-term storage facility like they have on Svalbard. OR (and this is the usual preference of active zoo-keepers) we can try to establish sustainable populations of captive born-and-bred individuals for re-introduction into the wild . . . after Armageddon reduces the number of people to more sustainable levels. That unique assemblage of traits is more than a single ape can carry, so the plan is to retain as much genetic diversity in what is available in the zoos and circuses of the world. That means a structured breeding program to mobilise semen from as many healthy males as possible. Nobody in the ape-breeding business believes that a super-fit wonder-male should be identified to 'improve' the species although that is the basic protocol in breeding cattle and other domestic animals. That shows a commendable humility about knowing what is best for wild animals. Diversity is certainly good for the future. 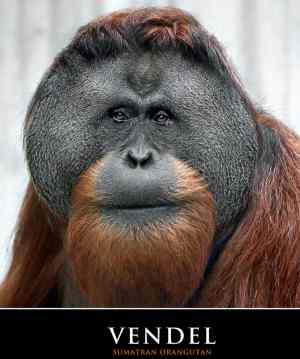 Which brings us back to Basel. With a rather Calvinist outlook on morality among their captive primates, the Zoo has separated their orangutans into 3 family enclosures, each with a [Ma+Pa+offspring] demographic. When Padma the most recent female cub was born, the management took saliva samples from all nine members of their herd stock and sent them off for paternity testing. Ooops! Budi, the younger male who was cohabiting with Maja, Padma's mother, was not the Dad. It seems that, despite a chain-link fence separating them, Maja had got it off with Vendel [R] the Patriarch next door. Clearly the old lady knew whom she fancied. There is speculation that Vendel's attractiveness lies in his 'flanges' - the horizontal dewlaps that surround his face and emphasise the size of his head. Budi may have a six-pack, but a well-turned flange - which only develop in some males with maturity - makes the ladies swoon . . . or at least present their bottom.

Zoos talk large and strong, especially at Christmas when the WWF is drumming for money, about their value as an ark for animals whose habitat in the Third World has been destroyed by people and corporations. But Zoos are also in it as a business - however much subsidised by local and national governments. What brings 'Gate' more than anything else is a new-born addition to the inventory - especially from a cute species - great apes, pandas, bears . . . other large carnivores at a pinch. If they were really interested in the welfare of their breeding stock they wouldn't put the animals out as a raree show for the public where the animals can be assaulted with coins, inappropriate food, and a deafening hubbub of cries and whistles.

Great apes, being clever enough to spot an opportunity to escape from Stalag MenschenAffen XIX, used a storm-broken branch to leave their enclosure in Belfast Zoo last weekend [video footage]. Being seriously institutionalised they didn't much like the open space and small edible children of The Outside and were easily persuaded to return to ad lib bananas Inside.
Posted by BobTheScientist at 07:33