". . . a man who knows that the world is not given by his fathers, but borrowed from his children"
Wendell Berry
The quote emphasises the fact that we don't own The Ringstone, the neolithic artwork that we discovered on our property 12 years ago. We are holding it in trust for future generations - perhaps in the hope that they will be better equipped to make sense of it. Grassing ourselves up to the Archaeology Service of Ireland and getting the site mapped comes with some constraint: now The Man [Chris Corlett] knows about it, we can't ship it off to California or build it into the wall of a shiny new bungalow. I think it may indeed impact on planning permissions for the fields abutting the site. Neolithic? that's obviously part of our Heritage. The disintegrating 16ft touring caravan which we lived in while our Farm was getting renovated? Not so much. With 'Native' trees the cut-off is 500 years ago. Weirdly Antiques Roadshow now frequently covers toys and knick-knacks which were just everyday stuff when I was growing up and now command surprisingly high prices. I have to report a sorry tale of careless destruction, so that the ESB, a semi-state body, can tick a box [✓] about diminishing its corporate carbon footprint. 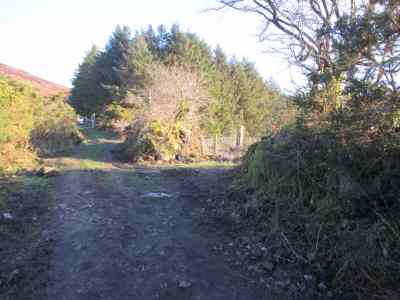 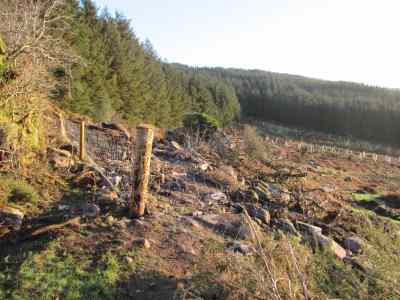 Access to Hickey's: used to be 2.5m wide and you had to duck past an occluding sceach, now you can drive a 20 tonne dump-truck straight in off Shannon's Lane. In the sun in the distance lower-right you can see the white deer-guards protecting the token un-Sitka trees in the plantation
There has been a recent rash of forestation up our valley. Not only upstairs where the bushy, rocky fields meet the commonage but right down to the fields beside which the R Aughnabrisky runs. At least our 0.4 hectare woodlot is a) native only [except - ooops my bad - for the lovely few dozen of larch Larix europea] b) a screen against the hideous steel sheds installed by my neighbour below. Several of of neighbours have recently sold up or leased their fields to a monoculture of Sitka spruce Picea sitchensis.  In December, I was moaning about the damage that might follow from Forestry Operations further up our lane. Well that damage is now manifest, and it was not directly to do with heedless messing with the drainage. The ESB's 15 hectare tract given over to Sitka runs in a narrow strip from the valley floor right up to the edge of the mountain and a much earlier plantation, which you can see in the pics above and we are expecting to be clear-felled any year now. At the top, the new planting crosses from one side to the other of Shannon's Lane that runs from the county road, past our place and up-up-and-away to the mountain. At the crossing, the mighty tracked digger drove straight through the little drive-way down to the steading we always knew as Hickey's . . . because the Hickey's lived there for a couple of centuries. 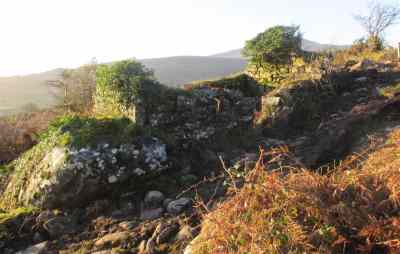 Hickey's was a sort of micro-clachan, although presumably all the sheds and dwellings were occupied by the one family and their stock. I'm sorry that I never made a photographic record of this one of the magical places where Dau.I and Dau.II played when they grew up on our farmlet. The Eastern gable of the main house [cottage, really) started up vertically from a massive erratic granite boulder [see above left]: the walls were about shoulder height high but no trace of a roof remained because the last of the Hickey's vacated two generations ago and the weather can be quite whippy-of-slates 300m above sea-level. 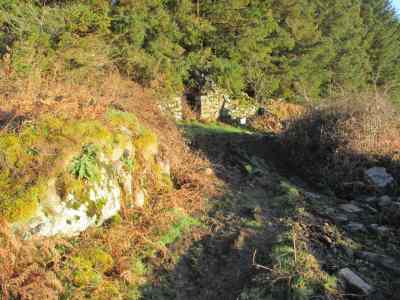 Every so often I would go up with some shears and trim back the brambles ‎Rubus fructicosus and hawthorn / sceach Crataegus monogyna twigs so that, by ducking and weaving a bit, folks could walk down and check out the clatter of small ruined buildings and the field walls that marked out the property. Someone must have instructed the digger-driver to leave standing any buildings; but now the context of those buildings has been largely obliterated. Which is a shame and a loss, because it's easy to smack something down but impossible to put it back like it was before - thaaaat's entropy. The fact that such heritage sites are protected must be a huge pain in the tits to contractors who are on piece-work [Picea geddit] to clear the site and plant it asap with 2500 30cm-high Sitka saplings to the hectare. Little wonder that they are careless in their clearing 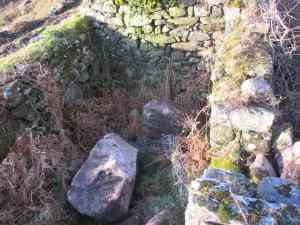 But really did the digger-man have to clear 3 substantial boulders [two clearly visible above] from the old laneway and drop them from a great height right in the kitchen of the Hickey's family home, where they will sit like so many turds for the rest of time?