On Saturday last, I was chatting to my mother in England and she mentioned, with a sniff of disapproval, that the UK government had swept imperiously through some foreign refugee camp and cherry picked a few handfuls of children to come and live under the soon to be independent monarchy. You can never be sure with my Mum which side of the fence she is on: is 16 children too many, or too few? She stoutly asserted, for example, two days before Brexit, that she was voting Leave to protest about David Cameron's sense of easy privilege. 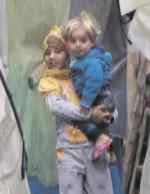 Five weeks ago Frances Fitzgerald, the Tanaiste and Minister of Justice addressed the UN in New York about  refugees. She was only prepared to do as much as any other EU government and only if they also acted. Which means is that, if the EU can ever get their act together and decide on a policy or a quantum of refugee solace, then Ireland will take 1% because that is our share of the EU population. In July she had asserted that, like the Brits, her people were looking out of the windows of their 4x4s in camps in Lebanon hoping to find presentable refugee children [L the acceptable faces of refugees: not too many sores, or snot, preferably of a sunny disposition and Christian?] to fill this quota. That picture is taken from a piece in WLR about a new refugee holding and enculturation centre in Clonea Strand Hotel outside Dungarvan, Co. Waterford. There is some local opposition because the hotel was a sink of Summer jobs for the young people of Dungarvan and that option is now closed.

The previous government, which included Fitzgerald, was talking large about taking in 4,000 refugees as recently as last year. Speaking on the fringes of the first UN summit on refugees and migrants in New York, an initiative co-chaired by Ireland, Fitzgerald said our Government will have resettled 870 >!huzzah!< migrants by the end of the year. That is well short of 4,000 although far in excess of the 96 [count them] resettled in 2014 and 176 in 2015. There are currently 4,000 people living under 'direct provision' in hotels in wholly unsuitable places in Ireland while bureaucrats shuffle the paperwork from desk to desk in Dublin; due process means that some people have been in direct provision for more than 10 years.

There is a tangle of different bodies with an interest in refugeeism. For example, the Irish Refugee Council IRC which has eight people and four lawyers on the payroll. And NASC The Irish Immigrant Support Centre in Cork, an NGO employing 11. The Irish Refugee Protection Programme (IRPP) was set up in September 2015 with a budget for 2016 of €25 million but I can find nothing extra for refugees in the recently announce 2017 budget. That's because we are at the start of what the media have been lazily calling a "winter of discontent" but which I prefer to call the Winter of I'll have some of that. The original winter of discontent was 1978-1979 in the UK when the Labour government attempted to keep pay increases in the public sector below 5% in an effort to control inflation. Call me judgmental but, if you/we have a salary and associated pension rights in the Irish civil service, you/we are in global terms fantastically well off: 2.8 billion people live on less than $2 a day. You don't have to go as far as a cardboard shack in Somalia: I was recently speaking to Dau.II whose latest minuscule pay-hike gets her tuppence-ha'penny above the minimum wage. She is now luxuriating in the result that, from four, there are now five sorts of cheese in her fridge of her rented flat. As one of the teaching unions ASTI and both those of the Gardai GRA and AGSI prepare to go on strike for 'restoration' of a previous state of bounty, the government is saying that there is no money in the pot. But in the 2017 Budget two weeks ago, an additional €1.3 billion of tax-payers money was dispersed by the Finance Minister like a medieval potentate showering doles to the crowd as his carriage drove into Leinster House.

I took the position a couple of days ago, that Irish science funding would be at nothing if it followed the same old same old criteria adopted by other Western democracies. Taking a lead by taking a risk might yield extraordinary results; while same old same old would, at best, yield good results. Ditto with refugees. What if the Irish Government allocated half of their discretionary budget: say €650 million, towards the refugee crisis? That would put it to The Men like Uncle Sam and John Bull as an approach in the tradition of King Christian X of Denmark threatening to wear a yellow star if Danish Jews were so compelled.

Frances Fitzgerald and the striking public servants need an inspiring story. The Calais Jungle was a shanty town outside the French port where uncountable numbers of refugees [3000? 6000?] paused in limbo waiting for an opportunity to get to an imagined promised land across the English Channel. I say was because, on Monday 24 Oct 2016, L'Homme started to close it down  and ship the inhabitants shipped elsewhere in France. Yesterday, several fires broke out and now the place is blazing but 'empty' according to the police. Of 1,500 unaccompanied minors, several have managed to disappear. We know a young chap from Scotland, about Dau.II's age, who has been working as a volunteer in a soup kitchen in The Jungle over the Summer. Let us, to preserve his anonymity and modesty, call him Clancy-boy. As commitment, it trumps my paltry contribution to the dispossessed in 1972 making tea and toting bales at Stansted Airport for the 27,000 Ugandan Asians recently expelled from their homes by Idi Amin. After several weeks of making sure that folks in the Jungle got at least one square meal a day, Clancy-boy had to go home for some event. On the train North, he heard that the French authorities were planning to finally close and bulldoze the whole camp. He got off the train, said hello to his mother, completed the immediate business and turned on his heel to return to France where he felt he would be needed in the dark days ahead. With his feet he was agreeing with Sydney Smith "It is the greatest of all mistakes to do nothing because you can only do little."
Posted by BobTheScientist at 07:07