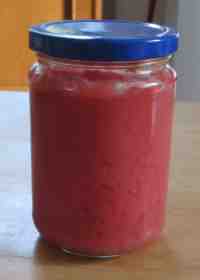 It seems like just last week [because it was just last week] that we were yomping off up the mountain to find sheep at the tail end of the Upland Grazing Season. I had intended to do this on Saturday but it was a drizzly mizzly ould day from first light to last and you have to be motivated to be looking for sheep while soaking wet. Accordingly I spent Saturday focussed on indoors jobs like sitting my capacious arse on the sofa and carefully watching the ceiling while the laundry was processed by the washing-machine. Later on I woke up and decided to de-clutter the fridge into something edible. A couple of weeks ago I picked about 3kg of crab-apples off one of our trees and a lot more (scabby, half eaten, some bruising) off the ground. The latter filled half a 25kg feed-sack and I lurried them into the sheep-troughs with a handful of sheep muesli [mmmm good]. They were stand-offish, but when I checked back later, all the apples had been eaten, I presume by the sheep. The fresh-off-tree apples were mostly the colour and size of large plums. I had boiled them up and pushed them through a sieve, filled 6 jam-jars and popped them in the oven to kill surface microbes. The pulp, with its dark and pale pink looks uncannily like a settling pint of Guinness. Now, I'm not naive enough to believe that my treatment will have 'canned' the apples for a couple of years of storage - a couple of months is more like it. A bit of pastry, a jar of crab-apple, the heel of a chunk of marzipan >!et voilà!< Apple & almond pies. 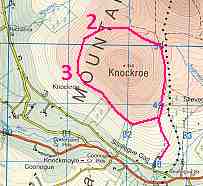 Sunday was a different kettle of fish - kippers, I guess, as it was dry all day. You can't afford to miss chances to get out and doing in the back end of the year. In the forenoon, The Beloved announced that she was off up the mountain to bo-peep her sheep - again. It seems a little futile to go and look the sheep if, dogless and a bit crumbly, we lack the resources to fetch them in. But it was a day inviting a walk in the great outdoors and knowing where the sheep are and that they are still walking is surely reassuring. I volunteered to cut across the South Face of The Eiger An Cnoc Rua and meet TB on the other side of the hill where we had encountered Neighbour Martin a week ago. That way we would, hopefully, catch t'buggers in a pincer-movement. 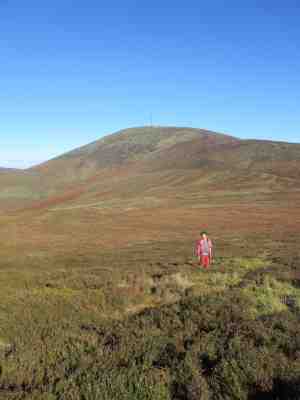 Things were looking good-omen when I upstarted a fox Vulpes vulpes and it bounded away across the heather. 15 minutes later I found 3 of our ewes [see Map L above - here be treasure, Jim Lad]. The neat but intense blue-green spot splotted on the back of the head after shearing had weathered into a smear the size of a soup plate - unmistakable on our hills. 15 minutes after that I found two ewes more looking sheepish as they hung out with a couple of louche black-faced strangers. And a few minutes later, I saw TB against the skyline [R: a bit later when she'd come down from on high]. We met up and headed round the hill and home for tea and medals. It's the first time I've ever formally walked the bounds of the hill which we own in common. It is, as near as dammit, 200 hectares = 2 sq.km. in extent, which is rather a lot of back-garden. If we walked it more often, we'd know it better. As we cut across the hill, a pair of golden plover feadóg bhuí Pluvialis apricaria launched out from under our feet and winged away across the heather scrub. These are red-listed for Ireland but seem to be making a come-back in the Blackstairs: we saw four last week. The grouse cearc fhraoigh Lagopus lagopus has long gone from our part of the world. I remember, the August (1997) after we moved into our present home, meeting two chaps, two guns and two dogs walking up our lane. It was really just for old times sake, they said, it being several years since they'd seen a grouse on the moors, let alone killed one. Plover and grouse inhabit a not dissimilar ecological niche; maybe the plovers can move in because the previous incumbents have died out or moved on. Our friend Roy, an keen amateur naturalist back home in Northumberland, remarked on how few birds he found on our Irish hills compared to home.

Who said mountains? Nietzsche said: "In the mountains of truth you will never climb in vain: either you will get up higher today or you will exercise your strength so as to be able to get up higher tomorrow" actually he said "Im Gebirge der Wahrheit kletterst du nie umsonst: Entweder du kommst schon heute weiter hinauf oder übst deine Kräfte, um morgen höher steigen zu können." because he was born in preußischen Provinz Sachsen [Saxony].
Posted by BobTheScientist at 12:28