The Minister of Xxxxxx, Aaaaaaa Bbbbbbb, was invited to address the student Law Society at The Institute on Monday. That's quite a coup, and it's just a couple of weeks since our Taoiseach Leo Varadkar was making a progress through our halls. I cut short my 3 hour research supervision class so that we could all go and get some informed opinion direct from the horse's cabinet member's mouth. I don't think any of my students came across campus to hear the Minister and the lecture theatre was only about half full - mostly with Law Students. In his introduction the neatly besuited young president of the Law Society quickly revealed how the coup was achieved: he and Bbbbbbb both hail from Mmmmmmm Co Lllllll. Next April we are hosting Environ2019, the national environmental science conference and are scrabbling about to get a key-note speaker to address both the envirnoraks and the public on climate change.  Names like Mary Robinson and Al Gore are being bandied about but it's not going to happen unless somebody drinks in the same pub OR we can find $50,000 for an 'honorarium'.

At the beginning of his short talk the minister announced that the meeting would be held under Chatham House Rules without troubling to explain what that meant. These are rules of engagement for public discourse on controversial matters. "When a meeting is held under the Chatham House Rule, participants are free to use the information received, but neither the identity nor the affiliation of the speaker, nor that of any other participant, may be revealed". The were first used in 1927 at the London headquarters of the Royal Institute of International Affairs, and are widely implemented (and have been translated into multiple languages) to allow freer exchange of ideas. Because there are no  imposable sanctions the rules has considerable moral force and allow participants to open up and say what they really think rather than reading the party line from a heavily vetted script.

Although my moral compass is quite wobbly, and although I feel the rule was imposed without informed consent, I won't therefore report on anything that the minister or any other participant had to say, except to acknowledge that I was neither shocked nor surprised by any of it. It won't, for example, put me in a stronger position to bet on when the next general election will be held. 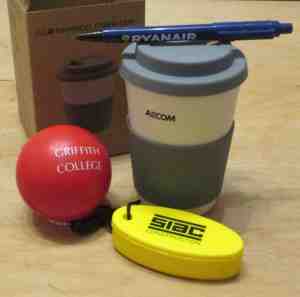 Outside in the concourse, I was able to catch a techie job fair at which a number of engineering companies were handing out logo-imprinted stuff and brochures to recruit our brightest and best students to work for them. I found one of my colleagues working through the coffee and croissants which were surely laid out for the delegates rather than us. He sourly remarked that Ryanair was handing out pens to prospects but they didn't give them (or uniforms or work-shoes) out to employees. So I went to snag one [L] for The Boy, whose second job out of school was working for Ryanair [prev] as a GHA - ground handling agent. The yellow fob is a) a floating keyring doubling as b) a stress ball. I already have a stress ball from Griffith College which I use to therapise my wonky thumb joints while driving. And the cup? It's a Eco Bamboo Fiber Cup made in China and meant to save the planet be being fully biodegradable -
bamboo + corn-meal + 'resin = biodegradable
except the silicone lid and insulating sleeve which emphatically are not biodegradable.
Posted by BobTheScientist at 07:13