IrfanView is the dog's bollix

Well finally I coughed up! and paid €10 to software engineer Irfan Škiljan for the use of his wonderful Freeware image-tweaker IrfanView [L for its squashed cat logo] I guess I use IrfanView almost every day; because I post a Blob every day and I try to leaven the blocks of text with a picture or two. As an early adopter of the internet (sent my first trans-Atlantic e-mail in Oct 1983), I wrote one of Ireland's first webpages in late 1994 - WWW was released for free in April 1993 and rapidly replaced Gopher, which is just a word to anyone under the age of 50. I've also used an acoustic coupler to connect to work from home maxxing at 300 bit/s or 100,000x slower than the broadband you city folks use to watch nonsense on Youtube. Those conditions set my clock for wasteful and heedless consumption of bandwidth. People who append a 1Mb corporate logo to the end of their e-mails; people who send 4.5Mb holiday or kids-R-cute snaps; these are driving the demand for broadband and causing the internet and its obese servers to consume more than 10% of the Earth's electricity.

Not me, I care about the planet and, while recognising the readability value of a few pictures, I do my best to reduce their size to the minimum commensurate with legibility. Indeed, I recognise that some of my fuzzy and pixellated graphics are barely fit for purpose except as solutions to break up the text.  IrfanView has, for at least the last 15 years, been my GoTo for reducing .jpg .png and .gif files to a smaller size, so that my readers in Aden, Bombay and Caracas don't have to wait 10 minutes for the download. I can't find it now but Chris "IT Crowd" O'Dowd has a funny sketch about getting porn in the 1990s: you'd set your computer downloading at night and the next morning a picture from scalp to clavicle had appeared on screen, you had to wait another 12 hours to see the joggly bits. 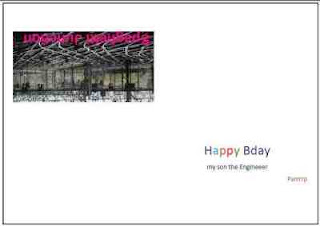 With Blogger-blogspot I can't easily place images where I want them, so I often use IrfanView's 'create panorama image' function to clag several pictures into one graphic. Outside The Blob, I use IrfanView to turn a picture upside down to insert in my MS-Word birthday-card template [see above for recent example]. Printed A4 that folds into a A6 size card with the picture on the front and greeting inside. Six or ten homemade bday cards a year saves me shelling out €10-€20 to Hallmark. And, as you see above, IrfanView allows you to add text, arrows, boxes and labels to your pictures. I imagine that some of these features can be got with MS-Paint, Powerpoint and/or Windows Photo Viewer but IrfanView suits me fine. And of course I'd rather support a struggling and creative Bosniac than Bill Gates. 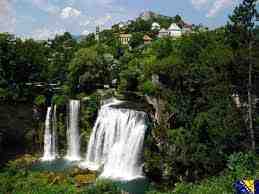 Irfan Škiljan was indeed born in Jajce [shown R with scenic waterfall], Bosnia but developed IrfanView while studenting in Austria in 1996. He'd like you to address him (and his product), as Earfan [who sounds romantically like an escapee from Gondor] rather than Urfan [most probably an Ork]; so that would be polite. IrfanView is really useful, efficient and friendly and I haven't begun to scrape the surface of its graphics capabilities. Hats off!
Posted by BobTheScientist at 07:31