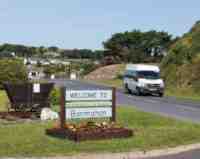 Monday last week was we had the chilling over-heating report from the IPCC on climate change. Be very afraid, especially if you live near water. Then on Friday 12/10/18, The Beloved and Dau.I made a rare excursion to Wexford Library, Enniscorthy branch and came away with two books and two brochures "with my name on them". It may be that right now everything looks like Climate Change but both the brochures were relevant to the problem and/or its solution.  There's hint/preview [L] of a minibus juxtaposed with a truck for bringing copper ore to the surface.

The first brochure was a timetable for the LocalLink bus between Bunclody [pop 2,000] and Enniscorthy [pop 12,000 mit Kino und Schwimmbad]. It picks up in Bunclody M-F at 0800 and delivers you to the heart of the bigger town 45 minutes later. It takes so long for a 23km journey because it winkles through the hamlets of the hinterland picking up car-less folk coming in to collect their pension and blow it on horses, drink and mince-pies. It will take you back home at 16.15, which is rather a full day. On Friday there are 2 additional services in both directions, so you could nip into town and escape home before you'd spent your entire pension in boozer or bookies. That strikes me as money well spent, not only for climate abatement, but for social inclusion. One less person in a residential care centre because they've drunk themselves into oblivion at home alone will pay for the service. But here's the thing, the success of such services depends at great deal on their attention to detail. If a bus doesn't run because the driver is sick and there's no back-up, if it runs late in Winter because someone forget to fill the tank the night before, then people won't use the service. Attention to detail starts with the public face, which is a) the drivers b) the web. Here [R] is a slice of timetable for a fantastic new service along Waterford's Copper Coast / Costa na Déise from Dungarvan to Tramore.  Doe's anybody know where to put an apo'strophe any more? Doe's anybody care? Sportds Ground? Playgorund? Does it matter? Yes: a service that cannot be bothered to spell on timetable cannot be expected to run buses on timetable. That service runs three times a day in each direction on Tue Thu and Sat. I'm guessing that's better than running once a day everyday. It's good for us because Dau.II can get a Dublin Coach from Cork to Dungarvan for €5 and then along the coast to Bonmahon for another €3. She can have a bit of a swim, mow the lawn, have lunch, and catch the bus back to Cork. Win! best deal on carbon footprint, aerobic exercise, community service for old people and lunch thrown in. It's not just the Sunny South East: these rural bus services cover the country with a web of connectivity. Some of them are DRT [demand responsive transport] like Ring-a-Link of 20 years ago: you phone a switch-board and a minibus diverts to pick you up. Now listen up fellow shit-kickers, use these buses or some bean counter will take them away.

Mais revenons nous a nos brochures! The other leaflet that The Beloved picked up in Enniscorthy library was from the Office of Public Works and Wexford CoCo: Enniscorthy Flood Defence Scheme. For all of the 00s, Enniscorthy was where I caught the bus for Dublin. The town is built on a hill at a bend in the River Slaney, but the quays on either side of the river are subject to flooding. This is made worse by the fact that although 20km from the sea, the Slaney is tidal to Enniscorthy. Car swamping floods occurred in 1924, 1947, 1965, 2000 and 2015. The last was Storm Frank, which was the tail-end of the wettest December since records began [drone footage]. Building The Seamus "1916" Rafter bridge in the centre of town in 1991 created a significant impedance to waterflow: 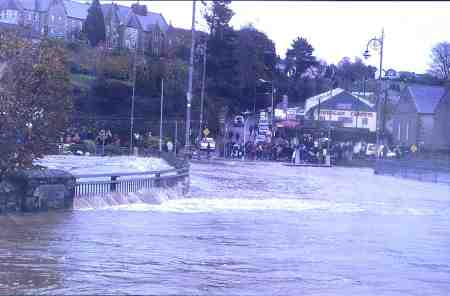 I've been in Enniscorthy several times when the water was out of the river bed and creeping towards the houses and at least once when you couldn't see daylight under Seamus Rafter Bridge [SRB shown above when the water was 2m yet higher]. It's a problem because Enniscorthy is on the N11, the main road between Dublin and Europort Rosslare. The engineer who designed the dam bridge so low clearly flunked his/her hydrology exams in college. The current on&on&on-going never implemented plan is to demolish the SRB and replace it with a) a high level pedestrian bridge in the same location and a new road-bridge about 1 km downstream and a good 5 m higher [it all looks very modern in CGI]. That might do it by removing impediments to flow downriver; but expect the Rail bridge at the Northern upstream edge of town to be carried away in the next substantive flood.