I was watching (several times) a report from U Glasgow's Centre for Virus Research CVR about interferon and its central role in fighting infection. It wasn't obvious-to-all-thinking-people what Dr Watson was talking about, especially if the word interferon was unfamiliar and you didn't know the difference between virus and bacteria. That piece-to-camera was one of a series of 13 similar very short films about the work at the CVR. I thought I'd check a few of the others to see if they were models of clarity. First up was Arvind Patel talking about Hepatitis C Virus:

It was a welcome change to see a scientist talking science without a laboratory in the background. The books are all PhD theses, so the implication is that Dr Patel is standing on the shoulders of giants. and/or he's had a helluva lot of successful PhD students. And I'm sure that the writers of those weighty tomes will have a mini-frisson of self-recognition as a nett contributor.  Next up was Ruth Jarrett talking about Hodgkins Lymphoma and Epstein-Barr Virus EBV [whc prev], which is a likely cause of that cancer. WTF? She's using the same damned string of books as Dr Patel by Dr Steinhauer and Dr Steinthorsdottir and so on: 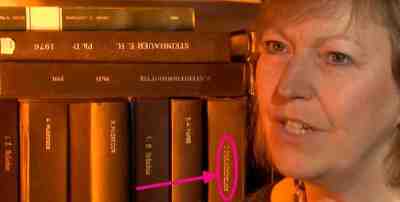 The camera must be really heavy and hard to move, because the 2 videos were uploaded 4 days apart in 2015, or the producer is showing a want of imagination in ringing the changes. After that I checked out John McLauchlan another worker on HCV at the CVR; he has the World's biggest optical microscope behind him. Now could he be the author of the thesis by J MacLaughlan, outlined in pink just to the right of Prof Jarrett's chin? €5 says they're the same. All good fun an a wholly inconsequential way.

Two days later, the Numberphile channel released a longish video about artificial intelligence, logic and probability by Rob Miles. He's chosen to sit in front of a string of books as well:

. . .  and a much more engaging shelf of books than a Lutheran bunch of 95 theses. I can see
There you go, train a researcher to find things out and t'bugger will spend an hour identifying pixellated book covers after dinner rather than knuckling down and washing the dishes. But I bet some of you will pause youtube sometime soon and go full-screen to see what somebody else likes to read. And I guess I'd be happy to get any of the above list [except for the Dawkins, I have no time for Dawkins] out of the library to see how its reads. 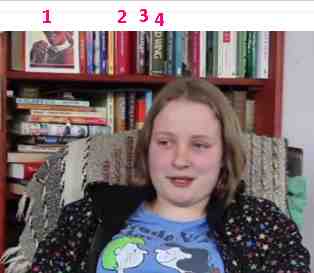 Did someone mention book-shelves? It turns out that one of my [mature] students at The Institute has just started on the Home Education journey when half of his children had adverse experiences in school. I went looking for some heart-warming propaganda to assure him that Home Ed can turn out well. Or at least turn out a couple of independent, tax-paying, community minded adults. There is one short film on youtube which had long ago slipped over my two-week event horizon.  Check out the young now tax-payer [R]. But in the current context, rather check out the books:
all of which are worth reading.
Posted by BobTheScientist at 07:30